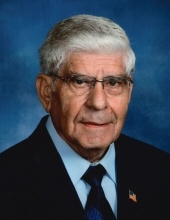 Gerald J. Portz
Sheldon, Iowa
Funeral services for Gerald J. Portz, age 86, of Sheldon who passed away on Friday, October 2, 2020 at Sanford Sheldon Medical Center. His funeral mass will be 10:30 A.M. on Wednesday, October 7, 2020 at St. Patrick Catholic Church in Sheldon with Father Siby Punnoose ~ officiating.
Burial will be at St. Patrick Catholic Cemetery in Sheldon with military honors presented by McGlothlen-Cowie Post #145 of the American Legion
Visitation with family present will be from 4 – 6 P.M. on Tuesday, October 6, 2020 at the Vander Ploeg Funeral Home in Sheldon. Knights of Columbus Rosary will be held at 6 P.M. on Tuesday at the funeral home.
The family asks that everyone wear a mask to the visitation and as well as the funeral mass and practice social distancing.

Gerald John Portz, the son of Chris and Rose (Haupert) Portz was born on March 3, 1934 in Granville, Iowa. He attended country school south of Granville and St. Joe’s High School in Granville before moving with his family to Archer where he graduated from Archer High School in 1952. After he graduated, Gerald enlisted in the Army and served in Germany. He received the Good Conduct and Sharp Shooter medals. On May 25, 1959 he was united in marriage to Mary Jean Ahlers at St. Mary’s Catholic Church in Remsen. After their marriage, the couple made their home in Sheldon. Gerald was a part of the construction crew that built the Big 4 Elevator. When finished, he began working for the Big 4 which later became Land O’Lakes, retiring after 36 years in 1996. While working and raising his family, Gerald attended and graduated from Sioux Empire College in Hawarden, Iowa. After retirement he worked part-time for Pamida and ShopK0. Mary Jean preceded him in death on May 28, 2014. Gerald passed away on Friday, October 2, 2020 at Sanford Sheldon Medical Center reaching the age of 86 years, 6 months and 29 days.
Gerald was a member of St. Patrick’s Catholic Church. He was also a member of the Knights of Columbus for 65 years, the Sheldon Fire Department and the McGlothlen-Cowie Post of the American Legion, proudly bearing the American Flag for countless military funerals and other events. He volunteered for the Avenue of Flags and donated over 13 gallons of blood to the American Red Cross. He enjoyed watching butterflies, birds and going fishing. He was a hobby woodworker building many barns and doll houses for children, grandchildren, and to donate. He loved spending time in his garden, visiting with his neighbors and family, and was especially fond of his grandchildren and great-grandchildren.
Left to cherish Gerald’s memory are his children, Carol (Jeff) Parry of Sheldon, John (Kelly) Portz of Stillwater, Minnesota, Janet (Joel) Horn, Nancy (Cody) Granstra and Ann (Ron) Jansen all of Sheldon; 12 beloved grandchildren, Shannon (Perry) McKechnie, Jessica (Nick) Schmalen, Benjamin Parry, Alisha and Daniel Horn, Megan, Mark & Michael Portz, James (Morgan) Granstra, Chris Granstra, Emily (Scott) Ney and Christopher Jansen; 8 great-grandchildren, Gates, Jace & Brees McKechnie, Logan & Makenna Schmalen, Matthias & Isaiah Ney and Cambrie Granstra; sister and brother-in-laws, Millie Portz, Mike Lovely, Janiece (Chuck) Bohlke, and Orville Portz; also many nieces and nephews, relatives and friends.
Gerald was preceded in death by his wife, Mary Jean; his parents, parents-in-law, Andrew (Angela) Ahlers; his brothers, Donald and Raphael “Ray”; 5 sisters-in-law, Joan Portz, Delores Portz, Pat Lovely, Carol Ann and Lois Ahlers; great-grandchild, Rowyn; and a nephew, Steve Portz.
To order memorial trees or send flowers to the family in memory of Gerald J. Portz, please visit our flower store.