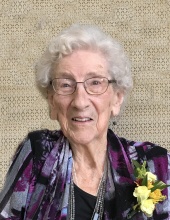 MUSIC
“The Love Of God”
Sung by: Gust Anderson
Special Music by the Grandchildren


Gertie VanderPloeg, the daughter of Gerrit and Tracy (Wiarda) VandenBrink was born November 30, 1919, at Alvord, Iowa. She graduated from high school in Inwood, Iowa and continued her education at Nettleton College in Sioux Falls, South Dakota and Hope College in Holland, Michigan. On January 30, 1953 she was united in marriage to Henry VanderPloeg in Grand Rapids, Michigan. After their marriage, they farmed near Sheldon until 1965. Then they farmed a year near Ashton before moving to Paullina where the couple lived and farmed the Kiser land from 1966 until 2009. Gertie and Henry returned to Sheldon in 2009 to make Fieldcrest Assisted Living their home. Henry passed away on December 29, 2012. Gertie continued to make Fieldcrest her home until she passed away on Wednesday, October 23, 2019 reaching the age of 99 years, 10 months and 23 days.
Gertie was a member of Oakdale Evangelical Free Church, rural Meriden. She taught in Paullina, Sutherland and Cherokee, retiring in 1982. Gertie took great pride in her crafts, including quilting, sewing, china painting, and wood carving. As a homemaker she made many wonderful home-cooked meals and kept her family well organized. Family and friends were very important to her, and she always enjoyed a party – the most recent of which was her early 100th birthday celebration in mid-September.
Left to cherish her memory are her children, Dianne (Jerry) Hallstrom of River Falls, Wisconsin, David (Peggy) VanderPloeg of Paullina, Timothy (Sherry) VanderPloeg of Altoona, Mark VanderPloeg of Primghar, Jonathan (Pam) VanderPloeg of Paullina, and Daniel (Lynne) VanderPloeg of Des Moines; 20 grandchildren, 30 great grandchildren, and 2 great-great grandchildren.
Survivors also include one sister, Gladys (Henry) Kroon, one sister-in-law, Cia VanderPloeg, and many nieces, nephews, and cousins.
Gertie was preceded in death by her parents, Gerrit and Tracy VandenBrink, brother, Ceel (Ruth) VandenBrink, two brothers in infancy, her brothers-in-law and sisters-in-law, Thelma and Pete Pott, Henrietta and Ray Bulthuis, Chap VanderPloeg, and Bob and Henrietta VanderPloeg.
The family would like to thank the wonderful staff at Fieldcrest and at Kindred Hospice for the love, compassion, and excellent care they provided to Gertie and Henry during the many years they were at Fieldcrest.

Isaiah 40: 31
To order memorial trees or send flowers to the family in memory of Gertie Vander Ploeg, please visit our flower store.