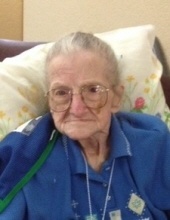 IN LOVING MEMORY OF
GERTRUDE VERBURG

Gertrude Verburg, the daughter of Arie and Jahanna (Hofland) Tensen was born on August 17, 1915 in Ocheyedan, Iowa. She grew up in Newkirk and attended country school outside of Newkirk, Iowa and graduated from Newkirk High School. She was united in marriage to William Henry Verburg in February of 1936. After their marriage the couple farmed. William preceded Gertrude in death in 2005. After his passing she moved to Fieldcrest Assisted Living in Sheldon and then moved to Monarch Meadows in Mankato, Minnesota in 2008. Gertrude passed away at Monarch Meadows on Tuesday, October 30, 2018 reaching the age of 103 years, 2 months and 13 days.
In her younger years, Gertrude enjoyed playing softball. On the farm she enjoyed raising chickens and gardening.
Those left to cherish her memory are her children, Keith and Barbara Verburg of Hospers, Iowa, Arvin and Karen Verburg of Mankato, Minnesota, Beverly Carr of Newalla, Oklahoma and Gary and Angelyn Verburg of Minneapolis, Minnesota; ten grandchildren; twenty great grandchildren and five great-great grandchildren. She is also survived by two sisters-in-law; nieces; nephews; other relatives and friends.
Gertrude is preceded in death by her parents; husband, William; daughter, Phyllis Verburg in 2002; son-in-law, Donald Carr; great grandsons, Christopher Branscun and Carlos Lemus and nine siblings.
To order memorial trees or send flowers to the family in memory of Gertrude Verburg, please visit our flower store.