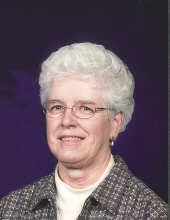 Memorials may be directed to: Village Northwest Unlimited

MUSIC
Processional “Amazing Grace, My Chains Are Gone”
“Better Off There” The Browns
Recessional “Glorious Day”

Memorials may be directed to:
Village Northwest Unlimited


Gladys M. Bolkema the daughter of Ben and Henrietta (Van Wettering) Holtrop was born on January 12, 1938 in Sheldon, Iowa and passed away on Wednesday, April 7, 2021 at Lyon Specialty Care in Rock Rapids, Iowa reaching the age of 83 years, 2 months and 26 days.
Gladys grew up on the family farm. When her mother fell ill, Gladys took over many of the household responsibilities, along with her sister, Delores. She married Ervin Bolkema on February 17, 1959 in Sheldon, Iowa. They lived on the farm until 1975, when they moved into Sheldon. They moved to the Christian Retirement Home in 2017 and to Sanford Senior Care in March of 2020. Ervin passed away on July 21, 2020. Gladys resided in Fieldcrest Memory Care until her move to Lyon Specialty Care in Rock Rapids, Iowa where she spent her final days.
Gladys and Ervin farmed near Sheldon. Gladys was actively involved in the day-to-day operation of the farm and spent many hours in the field with Ervin. She was instrumental in the establishment of the Village Store, fondly known as “Grandma’s Store” by her grandchildren. Gladys managed the store for 30 years until her retirement. Gladys’ fun-loving personality was an encouragement and joy to those around her. She faithfully attended her grandchildren’s school events. Gladys and Ervin enjoyed camping and volunteering. They developed many friendships through volunteering for Love Inc; Alpha Center; the Banquet; Volunteers in Christian Service and Justice For All. She was a long-time member of First Christian Reformed Church in Sheldon.
Gladys’ youngest daughter, Marcia, was born with Cerebral Palsy, cataracts, and other developmental challenges. Gladys and Ervin were passionate advocates for Marcia her entire life. They coordinated volunteers coming into their home when Marcia was a preschooler to assist with teaching her to crawl and eventually walk. Marcia required complete care and Gladys and Ervin provided it with love and joy. Marcia moved to the Village Northwest Unlimited and frequent visits by Gladys and Ervin were the norm. They continued to be Marcia’s advocate and demonstrated a deep love for her. Marcia welcomed her mother to heaven just three days after her death on Easter Sunday. We can only imagine what glorious reunion that was as they spend eternity with our Lord and Savior.
Survivors include her children, Brenda (Randy) Van Kley of Spencer, Iowa; Ed (Jody) Bolkema of Sioux Falls, South Dakota; four grandchildren, Chris Bolkema, Jen (Adam) Brown, Mitch (Kensi) Bolkema and Sara (Kaleb) Heckstein; five great grandchildren; Grayson Bolkema, Kate Brown, Liam Bolkema, Greta Brown and Sawyer Heckstein also other relatives and many friends.
Gladys was preceded in death by her husband, Ervin; her daughter, Marcia, and an infant daughter, Gayla; her parents, Ben and Henrietta Holtrop; her stepmother, Jeanette Holtrop; and brothers, John, Alvin and Robert.
To order memorial trees or send flowers to the family in memory of Gladys Bolkema, please visit our flower store.