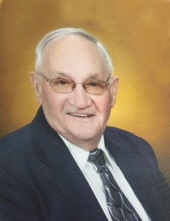 Services for Glenn H. Weidaman, age 90 of Paullina who passed away on Sunday, June 10, 2018 at Vista Prairie at Fieldcrest in Sheldon. His funeral service will be 10:30 A.M. on Wednesday, June 13, 2018 at Zion Lutheran Church in Paullina with Rev. Daniel Wagner ~ officiating.
Burial will be at Prairie View Cemetery in Paullina with military honors by Russell West Post American Legion.

Visitation with family present will be from 5 – 7 P.M. on Tuesday, June 12, 2018 at Eldridge Family Funeral Home in Paullina.

Memorials may be directed to the Orange City Area Hospice in Orange City, Iowa

GLENN H. WEIDAMAN
Glenn H. Weidaman, son of Chris and Rosa (Hoffman) Weidaman, was born August 3, 1927 in Lawton, Iowa. He attended country school in the Lawton area and later graduated from Lawton High School. In September of 1946, he entered the Army in Ft. Snelling, MN. He was active in the Korean War as a rifleman and was discharged in October of 1947.
On June 11, 1949, he was united in marriage to Darlene Laumbach in Lawton. After their marriage, the couple lived in Lawton where they operated the Cities Service Station before moving to Onawa, Iowa, where he was a wholesale route salesman for Keitges Sales. In December of 1968, the couple moved to Paullina where they had purchased the Coast to Coast store. Glenn and Darlene operated Weidaman’s Coast to Coast until retiring in 1992. He was also a bus driver for Zion Lutheran School and Paullina School District for many years. After retirement, they remained in their Paullina home and spent their winters in Weslaco, Texas. Darlene passed away in April of 2003. Glenn passed away on Sunday, June 10, 2018 in Sheldon Fieldcrest Memory Care Unit at the age of 90 years, 10 months and 7 days. Glenn was a member of Zion Lutheran Church in Paullina. He enjoyed camping, playing cards and attending great-grandchildren’s activities.
He leaves to cherish his memories a son and his wife, Rick and Paula Weidaman of Paullina, Iowa; a daughter and her husband, Cheryl and Ed Grotenhuis of Alton, Iowa; grandchildren, Mike (Cindy) Simm and Chad (Shelly) Simm of Paullina, Iowa; Andrea (Chad) Tjossem of Primghar, Iowa; Jill (Dan) Grant of LeMars, Iowa; ten great grandchildren, Shelby (Brytton) Kelleher of Primghar, Iowa; Colby Simm and Joshua Simm of Paullina, Iowa; Hunter, Ashlynn and Kaden Tjossem of Primghar, Iowa; Andrew, Avery and Aubrey Grant of LeMars, Iowa and a host of other relatives and many friends.
Glenn was preceded in death by his wife, Darlene, parents, a brother, Fritz Weidaman; sisters, Elizabeth Vest and Helen Peters, a sister-in-law, Rosella Laumbach and a brother-in-law and very close friend, Raymond Peters within four hours of Glenn’s death.
To order memorial trees or send flowers to the family in memory of Glenn H Weidaman, please visit our flower store.