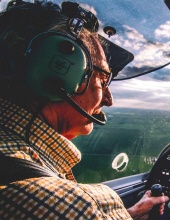 CONGREGATIONAL HYMN
“Jesus and Me”
MUSIC
“We Shall Behold Him”
Sung by: Brian Tutje
CD ~ “I Can Only Imagine”
CD ~ “Home”
“Lord’s Prayer”
Sung by Pastor Dave Van Kley
“The King Is Coming”
Pianist: Jody Van Kley

Glenn Virgil Zylstra, the son of John and Luella (Balster) Zylstra was born on November 12, 1934 in Sibley, Iowa. He attended country schools near Little Rock and Sibley and later graduated from Ashton Public School. Glenn went on to further his education receiving his Bachelor’s degree from Westmar and also received his Master’s degree from University of South Dakota and Minnesota, Duluth. Glenn enlisted into the United States Army. Glenn was united in marriage to Verna Mae Moet on June 16, 1961 in Sibley. After their marriage Glenn taught school in Kingsley, Iowa and Sheldon for five years each. He was the counselor at Sheldon High School for 28 years and also taught part time at Northwest Iowa Community College. Glenn passed away on Monday, March 19, 2018 at Sanford Sheldon Medical Center reaching the age of 83 years, 4 months and 7 days.

Glenn was an active member at Bethel Reformed Church. He served as deacon, elder, taught Sunday school, catechism and was Sunday school superintendent. He also served as treasurer and chairman of the Christian Education Team. Glenn was still active in Kiwanis and bowling till his last day. He was a member of Sky Hi Flyers and past president of Kiwanis. Glenn’s enjoyable memories were his family and grandchildren. He also enjoyed flying, motorcycling, bowling, helping with farm work after his retirement. He especially enjoyed attending his children and grandchildren’s school and church activities.

Left to cherish his memory is his wife of 56 years Verna of Sheldon; his children and their spouses, Dr. Scott and Vicky Zylstra of Sylacauga, Alabama and Sandra and Tom Ahlers of Granville, Iowa; grandchildren, Jason Zylstra, Katherine and her husband, Trey Strickland, Nichole Lange and her fiancé, Zac DeHaan and Alex Lange; great grandson, Logan Strickland; brother, Dr. Dennis and his wife, Ronnie Zylstra; also other relatives and friends.

For Those I Love
For Those Who Love Me…

When I am gone, release me, let me go…
I have so many things to see and do
You mustn’t tie yourself to me with tears,
Be happy that we had so many years.
I gave you my love. You can only guess
How much you gave me in happiness.
I thank you for the love each of you have shown,
But now it’s time I travel on Alone.

So grieve a while for me, if grieve you must.
Then let your grief be comforted by trust.
It’s only for a while that we must part,
So bless the memories that lie within your heart.
I won’t be far away, for life goes on.
So if you need me, call and I will come.
Though you can’t see me or touch me,
I’ll be near.

And if you listen with your heart, you’ll hear
All of my love around you soft and clear.
And then, when you must come this way alone…
I’ll greet you with a smile and
“Welcome Home.”
To order memorial trees or send flowers to the family in memory of Glenn V. Zylstra, please visit our flower store.