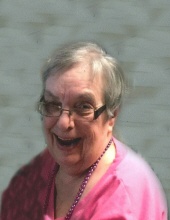 Visitation with family present
will be from 5 – 7 P.M.
on Thursday, May 10, 2018
at the Vander Ploeg Funeral Home in Sheldon.

After today’s service relatives and friends
are invited to join the family in
Autumn Park Apartment Community room.

Arrangements under the care of the
Vander Ploeg Funeral Home; Sheldon, Iowa
GLORIA J. DUNNICK
Gloria Jean Dunnick, the daughter of Reynold and LaVonne (Wallick) Huff was born December 17, 1942 in Matlock, Iowa. She received her education in Sheldon and graduated from Sheldon High School. On December 2, 1961, she was united in marriage to Donald R. Dunnick in Sheldon, Iowa. After their marriage the couple settled in Sheldon where for many years Gloria was employed at Oak Park Care Center, now (Sanford Senior Care) before her retirement. Donald passed away on March 16, 1998 in Sheldon. Gloria’s retirement years were spent in Sheldon until ill health forced her to move to the Accura Health Center in Cherokee in September of 2015. She passed away there on Wednesday, May 9, 2018 reaching the age of 75 years, 4 months and 22 days.
She was a member of the Eagles Club in Sheldon and the Red Hat Society. She enjoyed her family, coffee at Hardee’s, shopping, a trip to the casino and riding around in her golf cart.
Gloria is survived by her four children, Steven (Denise) Dunnick of Clear Lake, Iowa; Daren Dunnick of Ft Collins, Colorado; Kristi (Todd) Ames of Marcus, Iowa and Tracey (Tyson) Kester of Sheldon, Iowa; thirteen grandchildren, Brett, Kilay, Alisha, Allen, Austin, Jourdaisha, Amanda, Adam, Kylee, Shana, Michael, Bobby and Brandon; six great grandchildren, Braylee, Maya, Hayden, Ayden, Brady and Colby; two sisters, Bonnie Grave and Donna Orthmann both of Sheldon, Iowa also other relatives and friends.
She was preceded in death by her husband, parents, two brothers, Jerry L. and Robert P. Huff.
To order memorial trees or send flowers to the family in memory of Gloria J Dunnick, please visit our flower store.