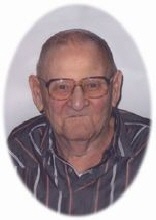 IN MEMORY OF
GORDON POTTS

Arrangements under the care of
Gaudian~Eldridge Funeral Home, Primghar, Iowa

Gordon Potts, the son of Daniel and Alma (Schuster) Potts, was born March 15, 1923 at Primghar, Iowa. He received his education in country schools in O’Brien County, Iowa. After his education he began farming east of Primghar, where he farmed for many years. He and his mother moved into Primghar in 1968. He remained in Primghar, where he cared for his mother until her death in 1998. He has made his home in the Primghar Care Center the last couple of years and passed away on Thursday, February 15, 2007 at the Baum-Harmon Mercy Hospital in Primghar, reaching the age of 83 years and 11 months.
When he was able, Gordon enjoyed having coffee and taking rides around Primghar in his pick-up and also enjoyed gardening.
He is survived by his nieces, nephews and a special caregiver, Junell Grady and her family of Archer.
Gordon was preceded in death by his parents, two sisters, Arlene Wiese and Lois Potts.
To order memorial trees or send flowers to the family in memory of Gordon Potts, please visit our flower store.