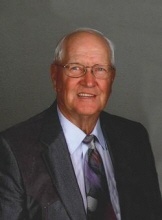 MUSIC
The Old Rugged Cross
Jesus Loves Me
One Day At A Time
Sung by: Marilyn Maurer, Colleen Niemeyer
and Mary Jo Huls

Arrangements under the care of the
Vander Ploeg Funeral Home, Boyden, Iowa

Memorials may be directed to the
First Reformed Church of Boyden Audio-Visual Program.

H. JUNIOR REUVERS
Henry Junior Reuvers, the son of Henry and Tena (Boerhave) Reuvers, was born September 15, 1934, on a farm north of Sheldon, Iowa. He moved with his family, at the age of four, to the Boyden area. He received his education and graduated from Boyden High School in 1953. On October 17, 1952, he was united in marriage to Helen Westra at the Little Brown Church in Nashua, Iowa. After their marriage, the couple settled in Boyden where Junior worked at DEMCO for a short time and then at the Co-op station in Boyden. He started farming with his father and had a dairy operation from 1962 until 1969. In 1969, the couple moved to the Westra farm southwest of Boyden where they farmed and raised a herd of purebred Angus cattle. They moved to Boyden in 2001. Junior remained active in the farming operation until his health failed. He passed away on Friday, February 10, 2017, at the Sanford Sheldon Hospital, reaching the age of 82 years, four months, and twenty-five days.
He was a long-time member of the First Reformed Church in Boyden where he served as an Elder and Deacon. He served on the board of the Sioux County Cattlefeeders Association and was their Man of the Year in 1981. He also served on the boards of the Boyden Co-op and the Christian Retirement Home in Sheldon. Junior thoroughly enjoyed his family, his farm, and his cattle herd. He was known as a jack of all trades, able to fix anything, and always willing to share those God-given skills with those in need.
Those that will miss Juniors quiet demeanor, steadfast countenance, and his strong Christian example are his wife of 64 years, Helen Reuvers of Boyden, Iowa; three sons and their wives, Tom and Bobby Reuvers of Boyden, Iowa, Jerry and Mary Beth Reuvers of Orange City, Iowa, and Dennis and Tracie Reuvers of Rock Rapids, Iowa; one daughter and her husband, Marcia and John Neely of Moville, Iowa; a daughter-in-law, Melody Reuvers of Boyden, Iowa; also eight grandchildren and fourteen great grandchildren; two brothers, Evert Reuvers of Primghar, Iowa, and John and his wife, Bernice Reuvers, of Marshall, Minnesota; one sister, Winifred Simmelink of Orange City, Iowa; also other relatives and many friends.
He was preceded in death by a son, Douglas Reuvers; parents, Henry and Tena Reuvers; one sister and her husband, Marjorie and Marion Menning; a sister-in-law, Carrie Reuvers; and a brother-in-law, Roland Simmelink.

To Those I Love
When I am gone, just release me, let me go,
so I can move into my afterglow.
You mustnt tie me down with your tears-
lets be happy that we had so many years.
I gave you my love, you can only guess
how much you all gave me in happiness.
I thank you for the love you each have shown,
but now its time I travel on alone.
So grieve for me awhile, if you must,
then let your grief be comforted with trust.
Its only for a while that we must part,
so bless the memories within your heart.
And then when you must come this way alone,
Ill greet you with a smile and a Welcome Home.
Written by Helen Reuvers,
Mom, Grandma, Great-grandma
To order memorial trees or send flowers to the family in memory of H. Junior Reuvers, please visit our flower store.