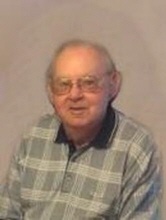 Visitation with the family present
will be Friday from 5 to 7 P.M.
at the Eldridge Family Funeral Home in Paullina.

Military Flag presentation by
Russell West Post of the American Legion of Paullina.

After the graveside service relatives and friends
are invited to join the family at the Laue Room
in the Paullina Community Building.

HARLEY J. STRAHMANN
Harley John Strahmann, the son of John and Katherine (Nissen) Strahmann was born August 25, 1927 on the family farm near Paullina, Iowa. He received his education at Calumet, Iowa. Harley served in the Army for two tours of duty after World War II serving in Germany. He returned to the Paullina area where he farmed for a short time. He and his sister, Verlee moved to Wheat Ridge, Colorado where Harley managed a V.F.W. Club in Arvada, Colorado for several years. He and Verlee operated apartment house buildings in Wheat Ridge. In 1992, he and Verlee moved to Montrose, Colorado where they stayed until moving to Paullina in 2012.
Harley enjoyed family times, playing cards and collecting coins.
He will be remembered by two sisters, Verlee Strahmann of Paullina and Joan Sauer of Gardnerville, Nevada; a niece, Debbie and her husband, Mickey Riley; a great nephew, David and wife, Melissa Duran and their son; a great niece, Melissa and husband, Kasey Compton and their family; an adopted granddaughter, Sarah Wohlert; close family members, Nelda and Dennis Dickmeyer, and Ed Johannsen; also other relatives and friends.
Harley was preceded in death by his parents, a brother-in-law, Wilbur Sauer and a nephew, William Sauer.
To order memorial trees or send flowers to the family in memory of Harley J. Strahmann, please visit our flower store.