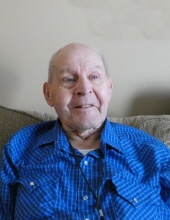 Visitation with family present
will be from 2 – 4 P.M. on Sunday, November 4, 2018
at the Vander Ploeg Funeral Home in Sheldon.

MUSIC
“On The Wings Of A Snow White Dove”
Sung by: Clint Badberg
CONGREGATIONAL HYMNS
“One Day at a Time”
“Softly and Tenderly”
Organist: Carleen Kehrberg

After today’s service, relatives and friends are
invited to join the family in the fellowship hall of
St. Paul Lutheran Church in Sheldon

Arrangements are under the care of the
Vander Ploeg Funeral Home; Sheldon, Iowa.
HARM J. OLTMANS
Harm John Oltmans, the son of Harm John and Sarah Alice (Riddle) Oltmans was born on September 11, 1928 in Windom, Minnesota. He received his education in the Windom and the Wilder, Minnesota area. He also attended 1 year of high school in Sheldon, Iowa. On February 22, 1951, Harm was united in marriage to Joann Gertrude Rons on the family farm near Sheldon, Iowa. To this marriage they were blessed with 6 children, Diane, Donna, Darla, Daryl, Darwin and Dale. Harm and Joann farmed from 1952 – 1963; Harm then worked at different jobs including Sioux Steel Mfg., Hull Creamery and the Hull and Boyden Co-op gas stations as a mechanic and bulk propane driver before retiring in 1990. Joann preceded him in death on December 27, 2017. Harm remained in their home passing away on Wednesday, October 31, 2018 at the Fieldcrest Assisted Living, reaching the age of 90 years, 1 month and 20 days.
He was a member of St. Paul Lutheran Church in Sheldon. Harm enjoyed going to auctions, gardening, garage sales, camping and going to Mesa, Arizona for the winters. He especially enjoyed spending time with his children and grandchildren.
Left to cherish his memories are his three daughters and their husbands, Diane (Don) Martin of Ocala, Florida; Donna (Gary) Petitt of Sheldon, Iowa; Darla (Dwight) Jacobs of Spirit Lake, Iowa; 2 sons, Darwin (Kandi) Oltmans of Orange City, Iowa and Dale (Lora) Oltmans of Alton, Iowa; daughter-in-law, Shirley (Oltmans) and her husband, Dean Domeyer of Ellsworth, Minnesota; 13 grandchildren and 20 great-grandchildren, and other relatives and friends.
Harm was preceded in death by his wife, Joann; his parents, a son, Daryl Oltmans and a grandson, Daryl Ray Oltmans; 6 brothers, Fletcher, Tom, George, John, Ed and Walt and 3 sisters, Marge, Nancy and Mable.

Our Father, who art in heaven,
hallowed be thy name.
Thy kingdom come;
Thy will be done on earth,
as it is in heaven.
Give us this day our daily bread;
And forgive us our trespasses, as we
forgive those who trespass against us;
And lead us not into temptation,
but deliver us from evil.

For thine is the kingdom,
and the power, and the glory,
forever and ever.

Amen
To order memorial trees or send flowers to the family in memory of Harm John Oltmans, please visit our flower store.