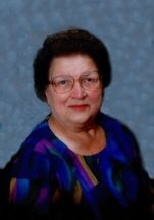 IN MEMORY OF
HAZEL M. HINZ

CONGREGATIONAL HYMNS
No. 510 “Be Still My Soul”
No. 516 “What a friend We Have in Jesus”
Organist: Joyce Burns

Hazel Marie Hinz, the daughter of Ernst and Ottilie (Stoeckmann) Strampe, was born January 18, 1916 in Germantown, Iowa. She received her education in St. John Lutheran School in Germantown. On January 6, 1937, she was united in marriage to Harry Hinz in Paullina. After their marriage the couple started farming in the Paullina area, where they farmed until their retirement in 1976. The couple moved into Paullina to make their home. Harry preceded her in death on August 2, 1990 in Paullina. Hazel continued to make her home in the family home until moving to the Paullina Care Center in March of 2003. She passed away at the care center on Thursday, January 17, 2008, reaching the age of 91 years, 11 months and 29 days.
She was baptized on January 30, 1916 and later confirmed on April 13, 1930 and was a lifelong member of the St. John Lutheran Church in Germantown. She was also a member of the Ladies Aid of the church.
Hazel leaves to cherish her memory two sons and daughters-in-law, Steve and Patricia Hinz and Dudley and Nancy Hinz all of Paullina; two grandchildren, Dean and his wife, René Hinz and Dawn and her husband, Scott Draube; also three step-grandchildren and four great-grandchildren and 5 step-great-grandchildren; also other relatives and many friends.
She was preceded in death by her husband, her parents, one sister, Margaret Albers; one brother, Martin Strampe and a step-great-grandchild.
To order memorial trees or send flowers to the family in memory of Hazel M. Hinz, please visit our flower store.