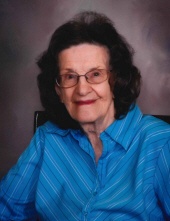 CONGREGATIONAL HYMNS
“In The Garden”
“What A Friend We Have In Jesus”
“How Great Thou Art”
Organist: Barb Burns

After today’s service, relatives and friends are invited
to join the family at Cook’s Café in Sheldon.

Helen Van Kekerix the daughter of Cornelius and Suzanne (Baron) Schreuder was born on January 5, 1932 on a farm outside of Doon, Iowa. She spent her childhood on the farm and attended the Rock Valley School through 8th grade. On September 14, 1951 Helen married Elmer Van Kekerix in Rock Valley, Iowa. To this union one daughter, Mary was born. The couple moved to the family farm north of Sheldon where they farmed for over 40 years. Helen attended classes and obtained her GED later in life. After Elmer retired in 1987 where they bought their summer house at Pequot Lakes, Minnesota. They spent half of their retired years in Sheldon and at the lake for 22 years. Elmer and Helen moved into Prairie View Home in Sanborn on August 15, 2011. Elmer preceded Helen in death on May 23, 2018. Helen remained at Prairie View where she passed away on Sunday, December 30, 2018 reaching the age of 86 years, 11 months and 25 days.
Helen was a member of the Church of the Brethren. She enjoyed gardening and weeding her garden, canning, fishing and playing cards.
Left to cherish Helen’s memory is her daughter, Mary and husband Chris Anderson of Little Falls, Minnesota; two grandchildren, Jason and girlfriend Cynthia of Brainerd, Minnesota and Tarah and her husband Jason Dworshak of Brainerd, Minnesota; four great grandchildren, Shelby and Ryan Hall of Sartell, Minnesota and Samuel and Hudson Dworshak of Rogers, Minnesota; brother, Clarence and Janet Schreuder; sister, Alma and William Landegent; sisters-in-law, Allene Schreuder and Suzanne Van Kekerix and brother-in-law, Thelmer Jansma; also other relatives and friends.
Helen was preceded in death by her parents; son-in-law, Jeff Hall; brother, Albert Schreuder; brothers and sisters-in-law, Raymond and Alice Van Kekerix, Weldon and Mildred Van Kekerix, Howard Van Kekerix, Martha Jansma and parents-in-law, Sam and Martha Van Kekerix.
To order memorial trees or send flowers to the family in memory of Helen J. Van Kekerix, please visit our flower store.