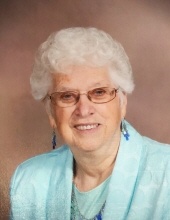 MUSIC
“The Lord’s Prayer” ~ Sung by: David Fintel
CONGREGATIONAL HYMNS
“I Was There To Hear Your Borning Cry”
“On Eagle’s Wings”
“Just a Closer Walk With Thee”
Organist: Verla Hibbing

Helen was born March 22, 1932 at her family home near Germantown, IA. She was the daughter of Fred & Louise (Schroeder) Mertens. Helen was raised in the Lutheran church, being baptized April 11, 1932, and confirmed April 14, 1946 at the St. John Lutheran church in Germantown. After a short bout with cancer, she passed away at the Sanborn nursing home on April 13, 2018.
She graduated from Paullina High School in 1950. She was married July 15, 1950, to Glen Jorgensen at her family home. They lived in Marcus for a short time before farming near Germantown, Paullina, & Cleghorn, where they made their living farming and raising a family. They retired to Paullina in 1992.
Helen was a farm wife, but also very active in church functions and groups. She enjoyed painting china, cake decorating, crocheting afghans for all her children and grandchildren, and she was an excellent cook and baker. She had many requests for her lemon pie and potato salad.
She immensely enjoyed her friends and the time she spent with them. Her family and all the get-togethers we had were so important to her.
Helen was preceded in death by her husband Glen, her son Larry, her Parents, her brothers, Delbert & Burdette Mertens, half brother Willie Breitbarth, sisters, Evelyn (Mertens) Selzer, Dorothy (Mertens) Klatt, her grand-son-in-law, Ben Bartlett, and two great grandchildren, Charlie and Bailey Bartlett.
Left to cherish her memory are Cindy (Barry) Whitehill, daughter-in-law, Deb Jorgensen, Linda (Rich) Ratka, Jerry (Dawn) Jorgensen, Craig (Amy) Jorgensen, 17 grandchildren, 29 great grandchildren, Sister, Betty Wilcoxon, and a host of other relatives and friends.
To order memorial trees or send flowers to the family in memory of Helen M. Jorgensen, please visit our flower store.