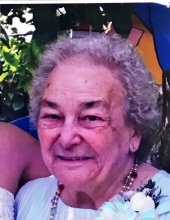 IN LOVING MEMORY OF
HELEN WEISHUHN

FINAL RESTING PLACE
At a later date in California

Arrangements under the care of the
Vander Ploeg Funeral Home; Sheldon, Iowa
HELEN WEISHUHN
Helen Weishuhn, the daughter of George and Louise (Cichon) Manos was born March 4, 1922 in Michigan. She received her education and graduated from high school in Michigan. On April 21, 1939, she was united in marriage to James Weishuhn in Ohio. After their marriage the couple moved to Michigan. The couple moved to California where Helen raised her children and later worked for Western Airlines and Delta Airlines before her retirement. Her husband preceded her in death in March of 1985. Helen remained in California until moving to Reno, Nevada to make her home near her son. In 2011, she moved to Sheldon, Iowa to make her home at Cobble Creek and be near her daughter. She passed away at the Sanford Sheldon Hospital on Saturday, May 26, 2018 reaching the age of 96 years, 2 months and 22 days.
Helen was of the Catholic faith. She enjoyed playing cards, word search and was known by her family to be an excellent cook.
Helen is survived by two children; James (Lana) Weishuhn of Reno, Nevada and Jeanine (Ryan) Dorsman of Sheldon, Iowa; twelve grandchildren, seventeen great grandchildren and five great great grandchildren also other relatives and friends.
She was preceded in death by her husband, one son, George Weishuhn on March 23, 1993, her parents, two brothers and one sister.

God is our refuge and strength,
an ever-present help in trouble.
Therefore we will not fear,
though the earth give way
and the mountains fall
into the heart of the sea,
though its waters roar and foam
and the mountains quake
with their surging.
There is a river whose streams make
glad the city of God,
the holy place where the Most High dwells.
God is within her, she will not fall;
God will help her at break of day.
Nations are in uproar, kingdoms fall;
he lifts his voice, the earth melts.
The LORD Almighty is with us;
the God of Jacob is our fortress.
Come and see what the LORD has done,
the desolations he has brought on the earth.
He makes wars cease
to the ends of the earth.
He breaks the bow and shatters the spear;
he burns the shields with fire.
He says, “Be still, and know that I am God;
I will be exalted among the nations,
I will be exalted in the earth.”
The LORD Almighty is with us;
the God of Jacob is our fortress.
To order memorial trees or send flowers to the family in memory of Helen Weishuhn, please visit our flower store.