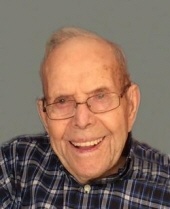 VISITATION
After 3 P.M. on Friday, November 10, 2017
with family present from 5 7 P.M.
at the Vander Ploeg Funeral Home in Sheldon

After todays service, relatives and friends are invited to join
the family in the fellowship hall of the church.

Henry John Van Heuvelen, the son of Cozyn and Hattie (Van De Weerd) Van Heuvelen was born September 27, 1919 in Volga, South Dakota. He received his education in a country school. He began to work on the farm which he truly loved to do. Henry served his country during World War II in the United States Army Air Force from May 7, 1942 until his discharge on September 29, 1945 reaching the rank of Corporal in the 235th Army Air Force Unit based in England. On June 21, 1945, he was united in marriage to Alvina Wilts in Newkirk, Iowa. The couple began farming and moved to what was going to be their family farm near Gaza, Iowa in 1953. Henry farmed for a total of 54 years until retiring in 1999. The couple remained on the family farm until moving to Sheldon, Iowa in 2007. The couple enjoyed their retirement home in Sheldon. Henry passed away on Tuesday, November 7, 2017 at the Pearl Valley Care Center in Primghar reaching the age of 98 years, 1 month and 10 days.
He was a member of the American Reformed Church in Primghar and was currently attending the First Reformed Church in Sheldon. While at the American Reformed Church he taught Sunday School. Music was an important part of his life, singing with Alvina and in many mens quartets. Henrys family was very important to him. He also loved to farm and travel in their retirement years.
Left to cherish his many memories are his wife of 72 years, Alvina Van Heuvelen of Sheldon, Iowa; sons, Ronald (Vicki) Van Heuvelen of Oskaloosa, Iowa; David (Judi) Van Heuvelen of St. Lawrence, South Dakota; Wayne (Priscilla) Van Heuvelen of Urbandale, Iowa; a daughter-in-law, Mary Van Heuvelen Wheaton of Sioux Falls, South Dakota; eight grandchildren, Ann (Matt) Drummond, John (Whitney) Van Heuvelen, Dawne (Matt) Olson, David Jr. (Laura) Van Heuvelen, Joy (Bryan) Wedan, Matthew (Kaylene) Van Heuvelen, Melissa (Joe) Carrington, and James Van Heuvelen, also sixteen great-grandchildren and other relatives and friends.
He was preceded in death by a son, James Van Heuvelen, parents, brothers and sisters, Gilbert Van Heuvelen, Raymond Van Heuvelen, Nettie Eggink, Bertha Dolieslaager, Jennie Wagenaar, Benard Van Heuvelen, Anna Den Hartog and Harriet Schemper.
To order memorial trees or send flowers to the family in memory of Henry Van Heuvelen, please visit our flower store.