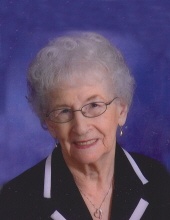 IN LOVING MEMORY OF
IDA ANDRINGA

HONORARY CASKET BEARERS
“All of her Grandchildren”

Ida Andringa was born June 23, 1920 in Sanborn, Iowa the daughter of Harry and Sadie (Terpstra) Klaver. She attended the Sanborn Christian School in Sanborn, Iowa. Ida was united in marriage to Fred Andringa on September 7, 1941 in the Sanborn Christian Reformed Church in Sanborn. After their wedding they lived for a brief time in Melvin, Iowa. They farmed near Sanborn until 1964 and then moved into Sanborn where they lived until 1993, when they moved to Sheldon, Iowa. Fred preceded her in death on January 9, 2003. Ida moved into the Christian Retirement Home in Sheldon in 2005, living there until she moved to Fieldcrest Assisted Living in Sheldon in April of 2017 and in November of that same year she became a resident of Sanford Sheldon Senior Care, living there until she passed away on Tuesday, September 28, 2021 reaching the age of 101 years, 3 months and 4 days.
Ida was a member of the United Methodist Church in Sheldon where she was active in the quilting group and a member of the Hannah Circle. She enjoyed sewing, quilting and crocheting. She sewed for others and donated numerous quilts and blankets to missions. No grandchild was without a blanket or two or three. She also enjoyed cooking and baking with and for the grandchildren.
She is survived by her children, Shirley Sterk of Albuquerque, New Mexico and Jay (Bev) Andringa of Sheldon, Iowa; a son-in-law, Larry Meeker of Wichita, Kansas; grandchildren, Todd (Rosa) Sterk, Troy (Meredith) Sterk, Dawn (Tim) Harrington, Mark (Kara) Zonnefeld, Marcy Owens, Jodi (Joe) Kraemer, Jason (Christina) Andringa; Step-grandchildren, Jim Meeker and Vicki (Jay) Capps; great grandchildren and great-great grandchildren, nieces and nephews and other relatives and friends.
She was preceded in death by her husband, Fred; a daughter, Marilyn Meeker; sons-in-law, Mike Zonnefeld and Marlyn Sterk; her parents, 1 sister and 2 brothers.
To order memorial trees or send flowers to the family in memory of Ida Andringa, please visit our flower store.