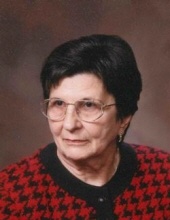 
After todays graveside service, relatives and friends are invited to join the family at Reds Caf in Hartley.

IRENE C. VOSS
Irene Christena Voss, the daughter of Rudolph and Anna Elizabeth (Werner) Meehlhause was born on March 11, 1919 in Hartley, Iowa. She graduated from Hartley High School in 1936. Irene taught in the rural schools of OBrien County while working to attain her Bachelor of Arts. Irene married Robert E. Voss on June 18, 1949 at Walterboro, South Carolina. She traveled the U.S. with Robert E. In 1962 they moved to Sheldon, where they both taught school. They retired in 1979.
Irene belonged to the Methodist Church since the age of 16.
Robert E. passed away on November 10, 1983 in Sheldon, Iowa. Irene continued to live in Sheldon until October of 2013 when Irene moved to Community Memorial Health Center in Hartley. She passed away at the age of 98 years, 7 months and 23 days.
Irene loved to read, listen to music, play bridge, travel and live theatre.
Left to cherish her memory are several nieces and nephews and special friends, Dr. and Mrs. Nolan Van Gaalen and family of Sioux Center.
Irene was preceded in death by her parents, husband, Robert E., three sisters and their spouses, Luella (Ray) Reinke, Faye (Leo) Groen, Betty (Don) Rembe.
To order memorial trees or send flowers to the family in memory of Irene C Voss, please visit our flower store.