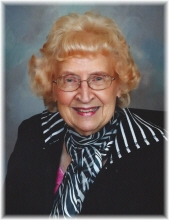 Irene Huffman, age 92, of Sheldon, Iowa, formerly of Des Moines, Iowa, passed away on Friday, March 17, 2017 at Prairie View Home in Sanborn, Iowa. Funeral Services will be Tuesday, March 21, 2017 at 9:30 A.M. at the Andringa Funeral Home Sheldon Funeral Service in Sheldon. Rev. Paul Van Maaren officiating. Burial in Canfield Cemetery in Altoona, (Ivy), Iowa, on Tuesday, March 21 at 3:30 P.M. Rev. Wendy Musgrave officiating. Visitation will be Monday, March 20, from 2:00 to 8:00 P.M. with the family present from 7:00 to 8:00 P.M. at the Andringa Funeral Home Sheldon Funeral Service in Sheldon. Irene Huffman was born on June 2, 1924 in Archer, Iowa. She was the daughter of Albert and Jessie (Donkersloot) Japenga. She had two brothers and three sisters and was one of the middle children. She was raised on a farm outside of Archer where she attended a country school. Her fondest memory was of riding their family's pony with her siblings. While attending North Central Bible College in Minneapolis, Irene met her future husband, Lawrence. They were united in marriage on January 20, 1942 at the home of her parents, located between Primghar and Archer. They were blessed with two daughters, Beverly Jane and Linda Joy. As a wife of a pastor, Irene followed where God's calling took them for 30 years, ministering in the Assembly of God Church. They lived in Correctionville, Iowa, Excelsior Springs, Missouri and Des Moines, Iowa. In addition to being the wife of a pastor, and a mother, Irene and her husband also owned and operated the Church Organ Inc. business in Des Moines, Iowa, selling pianos and organs. Lawrence passed away in June of 1999. Irene enjoyed playing the piano and organ and gave piano lessons after she retired. Irene enjoyed traveling and she went to Europe, Holland and Alaska. Her favorite place was Alaska, where she visited three times. She liked to shop and especially at the mall where she enjoyed watching people. She loved her family very much and was very good about sending cards for special occasions. Irene moved from Des Moines to Sheldon in September of 2013 and lived at the Christian Retirement Home. In April of 2016, she moved to Prairie View Home in Sanborn, Iowa where she passed away on Friday, March 17, 2017. Those left to cherish her memories are one daughter and son-in-law, Linda Joy and Willard Marquardt of Hartford, WI; six grandchildren and four great-grandchildren; one sister, Eleanor Skaar of Osage, IA. She was preceded in death by her husband, Lawrence Huffman; daughter, Beverly Jane Huffman (2005); her parents; two brothers, Jake Japenga and Ray Japenga; two sisters, Gert Mundy and Joyce Berger. In Loving Memory Of Irene Huffman Born: June 2, 1924 Passed Away: March 17, 2017 Age: 92 years, 9 months and 15 days FUNERAL SERVICE Tuesday, March 21, 2017 at 9:30 A.M. Andringa Funeral Home Sheldon Funeral Service OFFICIATING Rev. Paul Van Maaren MUSIC Music on CD's Processional: "What a Friend We Have In Jesus" During the service: "Amazing Grace" Recessional: "How Great Thou Art" CASKET BEARERS Keith Groendyke Judy Groendyke Jennifer Dacken Brian Dacken Aaron Groendyke Jason Groendyke INTERMENT 3:30 P.M. Canfield Cemetery, Ivy, Iowa Rev. Wendy Musgrave, officiating ARRANGEMENTS BY Andringa Funeral Home Sheldon Funeral Service Larry R. Andringa, Funeral Director

To order memorial trees or send flowers to the family in memory of Irene Huffman, please visit our flower store.