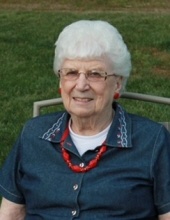 Irene Fritts Ingalls
Sheldon, Iowa
Services for Irene Fritts Ingalls, age 101, of Sheldon who passed away on Sunday, September 12, 2021, at Sanford Senior Care in Sheldon. Her funeral service will be 11:00 A.M. on Tuesday, September 21, 2021, at the Sheldon United Methodist Church with Pastor Marvin Lindley ~ officiating.
Burial will be at East Lawn Cemetery in Sheldon.
Visitation with family present will be from 10 A.M. until service time at the church on Tuesday, September 21, 2021.
Arrangements are under the care of the Vander Ploeg Funeral Home in Sheldon.


Irene Ingalls, the daughter of John and Gertie (Dekker) Vos was born on August 8, 1920, in Boyden, Iowa. She attended school in both Boyden and Sheldon. On November 29, 1941, she was united in marriage to Merrill H. Fritts in Canton, South Dakota. The couple lived in Sterling, Illinois during the war where Merrill was employed as a government inspector in a war plant. After the war, the couple moved back to Sheldon and owned and operated a convenience store and gas station for several years. Merrill preceded Irene in death on December 27, 1984. On June 16, 1990, she married Vernon L. Ingalls. He preceded her in death on March 20, 2009.
Irene was employed as a receptionist in the Optometry Office of Dr. A.G. Korver for seventeen years and fourteen years for Dr. H. J. Vander Griend.
Irene was a member of the Sheldon United Methodist Church where she was active in Hannah Circle and Golden Angels Choir.
Left to cherish her memory are her children, Lee and Jeanne Fritts of Cedar Falls, Iowa, Norma and Harlan Kamerman of Sioux Center, Iowa and Jack and Linda Fritts of Hiawatha, Iowa; stepdaughter, Lorae and Don Nieuwendorp of Sioux City, Iowa seven grandchildren, five step-grandchildren, numerous great grandchildren, and step great grandchildren, also many other relatives.
Irene is preceded in death by her parents, husbands, Merrill Fritts and Vernon Ingalls, sisters, Eunice Van Oort, Lena Jacobs, Mary Vellinga, Betty Vink, Gertrude Merley, and brother, Art Vos.
To order memorial trees or send flowers to the family in memory of Irene Ingalls, please visit our flower store.