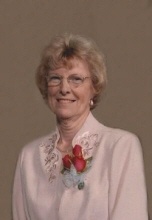 Visitation with the family present will be
Sunday, August 14, 2016 from 3:00 5:00pm
at the Eldridge Family Funeral Home in Paullina, Iowa.

CONGREGATIONAL HYMNS
The Old Rugged Cross
In The Garden
Beyond The Sunset
Organist: Florence Rehder

IRIS E. KOCH HUNNEL
Iris Elaine Koch Hunnel, the daughter of Ira and Alma (Hurtig) Tesch was born July 22, 1932, in OBrien County, Iowa. She attended country school. Iris was united in marriage to Jim Koch on June 29, 1952 in Calumet, Iowa. She worked for many neighbors in her younger years, taking care of their families and cleaning houses. She was a waitress in cafes in the many places she lived in her married life. She retired from the Pantry Caf in Storm Lake after 40 or more years waitressing. Iriss husband, Jim preceded her in death in 1985. Her greatest passion in life was her children and grandchildren. They were at the top but cleaning her house was also very important. Iris was united in marriage to Jack Hunnel in September of 1992. The couple made their home in Paullina and he preceded her in death in 2006. She also enjoyed dances especially polkas and waltzes, most recently taking that up again with her newly found friend, Fran. She passed away on Thursday, August 11, 2016 at the North Lake Manor in Storm Lake, Iowa, recently celebrating her 84th birthday.
Iris was a member of the Zion United Church of Christ in Calumet, Iowa.
She will be lovingly remembered by her children and spouses; Steve (Marla) Koch of Ankeny, IA; Kim (Kevin) Walsh of Alta, IA; grandchildren, Tyler Koch, Sara (Mark) Koch, Justin (Christina) Walsh, Gabriel Walsh; great grandchildren, Makayla, Jazmyn, Charleigh, Trenton and Chloe; two sisters and their husbands, Jean (Dick) Edwards and Marney (Bill) Click all of Paullina; brothers-in-law, Merle Kuehl of Granville; Ed Hattermann of Paullina; four sisters-in-law, Darlene Tesch, Shirley Gries, Lillian Koch and Dorothy Thiessen; also nieces, nephews, other relatives and friends including her special friend, Fran Carlson of Alta, IA.
Iris was preceded in death by her husbands, Jim Koch and Jack Hunnel; parents, two sisters, Gerda Kuehl and Karen Cooper; brother, Pete Tesch; sister-in-law, Norma Hattermann; three brothers-in-law, Bob Koch, Wilb Koch, and George Thiessen.
To order memorial trees or send flowers to the family in memory of Iris E Hunnel, please visit our flower store.