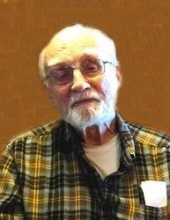 Visitation will be after 3 P.M.

at the Eldridge Family Funeral Home in Paullina

Go My Children With My Blessing

(At a later date)

After todays service relatives and friends are invited

John Leonard Wallin, the son of Emanuel and Agnes (Peterson) Wallin was born February 22, 1920 in Cherokee County, Iowa. He received his education in a country school. He began farming. On May 25, 1941, he was united in marriage to Evelyn H. Kruse at the Bethel Lutheran Church parsonage in Sutherland, Iowa. After their marriage the couple started farming southeast of Paullina, where they farmed for 45 years until retiring in 1986 and moved into Paullina. His wife preceded him in death on August 18, 2008 in Paullina. He remained in the family home and passed away on Saturday, October 7, 2017 at the Baum-Harmon Mercy Hospital in Primghar, Iowa, reaching the age of 97 years, 7 months and 15 days.

He was baptized and confirmed into the Lutheran faith in 1935 and was a long-time member of the Bethel Lutheran Church in Sutherland, Iowa. He served his church as an Elder and was a member of the Concordia League. He enjoyed playing cards, fishing and his special once a year trip with his family. He was a Minnesota Twins and Iowa Hawkeye fan.

Leonard is survived by one son, Warren and his wife, Shelley Wallin of Omaha, Nebraska and one daughter, Karen and her husband, Tom Riedemann of Cherokee, Iowa; one sister, LaVonne Rae of Boise, Idaho and a sister-in-law, Luella Wallin of Paullina, Iowa also other relatives and friends.

He was preceded in death by his wife, Evelyn, his parents, one brother, Floyd Wallin, a sister and her husband, Evelyn and Art Hoger, three brothers-in-laws, and two sisters-in-laws, Charles Rae Sr., Lester and Velma Kruse and Vernon and Evelyn Kruse.
To order memorial trees or send flowers to the family in memory of J. Leonard Wallin, please visit our flower store.