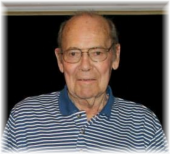 Jack Lee Ellis, age 82, of Sheldon, Iowa, passed away on Sunday, September 4, 2016 at his home in Sheldon. Memorial Services will be Friday, September 9, 2016 at 10:30 A.M. at the United Methodist Church in Sheldon. Rev. Kevin Gingerich officiating. Burial of cremains at East View Cemetery in Allen, Nebraska on Saturday. There will be no visitation. Jack Lee Ellis, 82, of Sheldon, Iowa passed away Sunday, September 4, 2016, after a short bout with cancer. Jack was surrounded by his loving wife and family at home when he went to his eternal resting place. Jack was born January 23, 1934 in Allen, Nebraska to Vernon and Eleanor (Johnson) Ellis. He graduated from Allen High School in 1951. It was in that same year on the first of June that he married his high school sweetheart, Lorraine Mae Malcolm. After 7 years of driving truck, Jack was a maintenance man for 18 years. While working at a Sioux City packing plant, he was propositioned to move north to Sioux Center, IA and work at the new Sioux-Preme Pack, as their head maintenance man. He then worked 20 years for Novelty Machine and Supply as an over-the-road salesman. He was a valued employee at every job and could size up what was needed to get the job done right. He enjoyed playing cards, specifically pinochle, golfing, fishing and hunting trips with his sons, collecting guns, playing around with horses, attending his grandchildren's events, cheering on the Nebraska Cornhuskers, and watching westerns. A highlight at the end of each month was when his children and grandchildren gathered on the last Sunday to just enjoy each other's company. In their 65 years of marriage, Jack and Lorraine resided in Allen, Nebraska and Homer, Nebraska followed by Sioux Center, Storm Lake, Sioux City, and Sheldon, Iowa. Left to cherish his memory is his wife, Lorraine and their six children, Dennis (Jane) Ellis of Alton, IA, Doug (Joanne) Ellis of Wausau, WI, Dan (Jean) Ellis of Sioux Center, IA, Dexter (Eve) Ellis of Sioux Center, IA, Donna (Merlyn) Sandbulte of Rock Valley, IA, and Debbie (Mark) Hooyer of Sioux Center, IA. There are 19 grandchildren and 36 great-grandchildren. Five brothers, Vernon (Sandi) Ellis of Torrington, WY, Keith (Dorothy) Ellis of Englewood, CO, Don (Fern) Ellis of Alta Loma, CA, Gary (Twyla) Ellis of Littleton, CO, Calvin "Cal" Ellis of Denver, CO. Two sisters, Joyce Edler of Yakima, WA and Nancy (Merlin) Schultz of Wakefield, NE, and many nieces and nephews. He was preceded in death by his parents, and brother, Jim. Jack will be remembered as a good husband and a loving father, grandfather and great grandfather. In Loving Memory Of Jack Lee Ellis Born: January 23, 1934 Passed Away: September 4, 2016 Age: 82 years, 7 months and 12 days MEMORIAL SERVICE Friday, September 9, 2016 at 10:30 A.M. United Methodist Church, Sheldon, Iowa Family Prayer Service at 10:15 A.M. OFFICIATING Rev. Kevin Gingerich MUSIC Pianist: Grant Ellis Grant Ellis, singing: "Give Me Jesus" Congregational Songs "Amazing Grace" "How Great Thou Art" INTERMENT East View Cemetery, Allen, Nebraska Following the Memorial Service, the family invites all for fellowship and lunch at the church. There will be an informal gathering from 1:00 to 3:00 P.M. at Sheldon City Park, following lunch. ARRANGEMENTS BY Andringa Funeral Home Sheldon Funeral Service Larry R. Andringa, Funeral Director We miss his smile, his kindly ways, With him we spent some happy days; We'll miss him when we need a friend, On him we always could depend. If only he were here today Then this to him we could say, We love you, Jack, Jake, Jackson, Dad, Grandpa!

To order memorial trees or send flowers to the family in memory of Jack Lee Ellis, please visit our flower store.