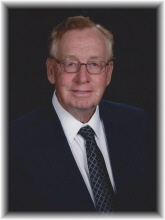 Jack Zylstra, age 79, of Sheldon, Iowa, passed away on Wednesday, January 16, 2019 at Sanford Sheldon Medical Center in Sheldon. Funeral Services will be Monday, January 21, 2019 at 10:30 A.M. at the First Christian Reformed Church in Sheldon. Rev. Luke Wynja officiating. Burial to follow at East Lawn Cemetery in Sheldon. Visitation will be Sunday, from 2:00 P.M. to 5:00 P.M. with the family present from 3:00 P.M. to 5:00 P.M. all at the First Christian Reformed Church in Sheldon. Memorials may be directed to the Sheldon Christian School. James "Jack" Marlyn Zylstra was born on October 11, 1939, in Sheldon, Iowa, to Jacob and Martha (Beuzekom) Zylstra. He attended Sheldon Christian School and graduated from Western Christian High School. Jack enlisted in the Sheldon branch of the Iowa Army National Guard and served for 3 years. He was united in marriage to Julia Sneller of Sioux Center, Iowa on September 6, 1960 at the First Reformed Church in Sioux Center. They lived in Sheldon where Jack worked for the Archer Elevator and Big 4 Soybean Processing (AGP) in the plant and drove truck. In 1969, Jack and Julia bought a farm west of Sheldon where they lived and worked for 48 years. During that time, Jack was a crop farmer, raised cattle and hogs, and tended to all the duties of life on the farm. Jack was a jack of all trades and a master of none. He worked very hard to provide for his family. He was blessed with the ability to fix almost anything that broke. Jack loved God, his family, riding his horse, and Sunday afternoons playing outside with the grandchildren. He was an avid fisherman and greatly enjoyed yearly family vacations to Minnesota. Jack loved to vacation in Branson and attend gospel music concerts. It was also a favorite of his to attend his daughter's and grandchildren's sporting events when he could. Sometimes on a Sunday afternoon, he would tell the family to get in the car and they would go for a drive. When asked who we were going to see, he would answer, "Someone with skin on their nose!" Jack passed away on Wednesday, January 16, 2019, at Sanford Sheldon Medical Center after suffering complications of pneumonia and Parkinsons. Those left to cherish his memories are his wife of 58 years, Julia Zylstra; his three daughters, Janet (Jeff) Crawford of Canton, SD, Jill (Larry) Beutler of Bancroft, NE, and Jennifer (Dan) Taylor of Rock Valley, IA; 10 grandchildren, 1 great-grandchild, 3 step-grandchildren, and 1 step-great-grandchild; one brother, Andy (Kathleen) Zylstra of Sheldon, IA; one sister-in-law, Henrietta Sneller of Sioux Center, IA; three step-brothers, Robert (Alicia) Wassenaar of Orange City, IA, Alfred Lee (Pam) Wassenaar of Sheldon, IA, and Wade (Kristi) Wassenaar of Sheldon, IA, and one step sister-in-law, Nyla (Dan) Harskamp of Orange City, IA; numerous nephews and nieces. Jack was preceded in death by his parents, Jacob and Martha Zylstra; brother, John Zylstra; step-father, Alfred Wassenaar; parents-in-law, Gerrit and Grace Sneller; and brother-in-law, Harold Sneller. In Loving Memory Of Jack Zylstra Born: October 11, 1939 Passed Away: January 16, 2019 Age: 79 years, 3 months and 5 days FUNERAL SERVICE Monday, January 21, 2019 at 10:30 A.M. First Christian Reformed Church, Sheldon, Iowa Family Prayer Service at 10:15 A.M. OFFICIATING Rev. Luke Wynja MUSIC Organist: Yvonne Bolkema Congregational Songs Processional: "What a Friend We Have in Jesus" PH # 436 During the service: "How Great Thou Art" Sing For Joy # 35 "When Peace, Like a River" PH # 445 Recessional: "By the Sea of Crystal" PH # 469 CASKET BEARERS Jesse Vande Weerd Jacob Vande Weerd Dylan Beutler Logan Beutler Jason Taylor Jared Taylor HONORARY CASKET BEARERS Julie Vande Weerd Jordan Taylor Megan Beutler Jenna Vande Weerd INTERMENT East Lawn Cemetery, Sheldon, Iowa Following interment, the family invites all for fellowship and lunch at the church. ARRANGEMENTS BY Andringa Funeral Home Sheldon Funeral Service Larry R. Andringa, Funeral Director

To order memorial trees or send flowers to the family in memory of Jack Zylstra, please visit our flower store.