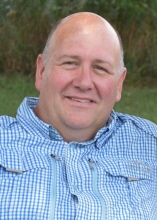 James D. Meendering, age 48, of Matlock, Iowa, passed away on Tuesday, January 22, 2019 at Sanford Sheldon Medical Center in Sheldon. Memorial Services will be Saturday, January 26, 2019 at 11:00 A.M. at the United Methodist Church in Sheldon. Rev. Kevin Gingerich and Rev. Bob Donley officiating. Family Graveside Services will be at Greenwood Cemetery in Matlock, Iowa, preceding the Memorial Service. Visitation will be Friday, January 25, from 2:00 to 7:00 P.M. with the family present from 4:00 to 7:00 P.M. all at the United Methodist Church in Sheldon. In lieu of flowers, the family requests memorials be directed towards an Education Fund for James and Erin. James D. Meendering of Matlock, IA was born to his parents James & Diana (Menning) Meendering on August 15, 1970 in Sheldon, IA. He grew up in Matlock and graduated from Sheldon High School in 1989. Jimmy married the love of his life, Lora Breuer, on June 2, 1990 at the Bethel Reformed Church of rural Ellsworth, MN. He was baptized in 2011 by his pastor and friend, Bob Donley, along with his son, Wyatt, at the lake near Paullina, Iowa. He first worked on the railroad with his dad, employed by LB Foster of Pittsburg, PA. He graduated with honors from Northwest Iowa Community College Truck & Diesel program in 1994, later completing the Automotive Training Program. Following the couple's move to Denver, Colorado in February of 1995 Jimmy worked for 7up Bottling Company. They returned home in May of 1996 and resided on an acreage near George, IA where they started their family. Their son Jesse was born in May of 1997 and Wyatt in August of 1998. Their daughter, Erin, was born in May of 2004. Jimmy served as the lead mechanic for Zomer Bros. Trucking in Sioux Falls, SD and then as General Manager of Farmers Coop in Rock Rapids, IA. He drove milk truck for Sudbeck Trucking in Sheldon, IA prior to the family's move to Riverside, CA in 2005 where he worked for A&A Ready Mixed Concrete. Their son, James, was born in Palm Springs, CA in February of 2006. They returned home to make the Matlock Schoolhouse their home in 2008. Jimmy enjoyed his job working for Co-op Gas & Oil in Sheldon from 2011. He loved his many fishing adventures in South Dakota with his family and lifelong friend, Jeff Hoven. He served on the Matlock Fire Department and Matlock City Council. His memory will be kept alive by his wife of 28 years, Lora; 4 children son Jesse (Justine) Meendering of Sheldon, IA; son Wyatt (Izabell) Meendering of Brookings, SD; daughter, Erin and son, James of Matlock; sister, Deb (Joe) Schuetz; brother, Bob (Tricia) Meendering; sister, Kelly (Craig) Klatt all of Sheldon and several nieces and nephews. He is preceded in death by his parents and grandparents. In Loving Memory Of James D. Meendering Born: August 15, 1970 Passed Away: January 22, 2019 Age: 48 years, 5 months and 7 days MEMORIAL SERVICE Saturday, January 26, 2019 at 11:00 A.M. United Methodist Church, Sheldon, Iowa Family Prayer Service at 10:45 A.M. OFFICIATING Rev. Kevin Gingerich and Rev. Bob Donley MUSIC Organist: Wil George Congregational Song "Be Thou My Vision" Special Music Jesse and Wyatt Meendering, duet Erin Meendering CASKET BEARERS Noel Maggert Scott Maggert Steve Huss Jeff Hoven Joel Niemeyer Kory Roos Rick Hulstein Chad Koedam INTERMENT Greenwood Cemetery, Matlock, Iowa Family Graveside Services will precede the Memorial Service. Following the Memorial Service, the family invites all for fellowship and lunch at the church. ARRANGEMENTS BY Andringa Funeral Home Sheldon Funeral Service Larry Andringa and Rick Hulstein, Funeral Directors

To order memorial trees or send flowers to the family in memory of James D. Meendering, please visit our flower store.