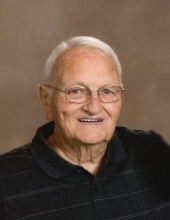 James Van Der Sloot, age 82, of Sheldon, Iowa passed on day, May 5, 2021 at the Avera McKennan Hospital in Sioux Falls, South Dakota. His services will be at 10:30 AM on Monday, May 10, 2021 at the First Reformed Church in Sheldon, Iowa with Rev. Paul Van Maaren ~ Officiating.

Burial will be in the East Lawn Cemetery in Sheldon with Military Honors conducted by the McGlothlen – Cowie Post #145 of the Sheldon American Legion.

Arrangements are under the care of the Vander Ploeg Funeral Home - Sheldon.
Online condolences may be made to the Family at www.vanderploegfunerals.com


James Marvin Van Der Sloot was born April 21, 1939 to Martin and Gertrude Van Der Sloot of Hull, Iowa. James was raised in Hull and Primghar. After graduating from Primghar High School in 1958, he worked for 2 years as a farm hand and assembling steel bins. In 1961, he enlisted in the Air Force. In 1963, he married his only love Betty Stofferan at the Church of Christ in Primghar. During their time in service, they were stationed in Michigan and Idaho, where they welcomed Darlene and Brian to their family. Upon discharge in 1966, James attended NITC and obtained his electrical degree. James was employed with IBP, moved and became an electrician in Melvin. In 1974 they welcomed their daughter Dawn. From 1978 until retirement, he worked for Land O’ Lakes/AGP Sheldon. The family enjoyed camping with family and friends on the weekends at Lake Shetek and Okoboji.
James’ love for sports was shown by attending his children and grandchildren’s sporting events along with other extracurriculars. After he retired at age 62, he spent his time dog sitting with his best friend “Lily”, bird watching, enjoying the outdoors and keeping up with the news and weather. He showed his love for God by being an active member of the First Reformed Church.
Those left to cherish his memory are his wife Betty of Sheldon, his daughter Darlene (Dennis) Jurgens of Sibley, IA, his son Brian (Anne) Van Der Sloot of Center Point, IA., his daughter Dawn (Brent) Prescott of Hospers, IA. Grandchildren are Matt (Rachel) Jurgens, Megan (Derek) Ackerman, Ashley Van Der Sloot, Emily Van Der Sloot, Brady Prescott, Morgan Prescott, Haley Prescott, Cassandra Prescott and 5 great grandchildren. 6 siblings, Harold (Sheila) Van Der Sloot of Sibley, IA, Marla Johnson of Hartley, IA., Gerrit (Sally) Van Der Sloot of Primghar, IA., Janice Van Der Sloot of Primghar, IA., Harlan (Wendy) Van Der Sloot of Flagler Beach, FL., and Gerda (Roger) Grothaus of Primghar, IA. other relatives and many friends.
He was preceded in death by his parents Martin and Gertrude.

Blessed by his memory.
To order memorial trees or send flowers to the family in memory of James Marvin Van Der Sloot, please visit our flower store.