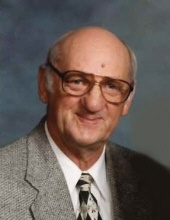 Arrangements are under the care of the
Andringa Funeral Home – Sheldon.
JAMES “JIM” SMIT

James (Jim) Smit was born on November 17, 1932, on a farm near Hospers, Iowa. He passed away on April 20, 2021 at Sanford Senior Care, Sheldon, Iowa, at the age of 88 years, 5 months, 3 days.
Jim was the son of Joe and Winnie (De Jong) Smit. The family lived on farms in the Sheldon, IA area, eventually settling on the farm north of Sheldon where Jim would spend much of the rest of his life. He attended Sheldon Christian School. He was a lifetime member of the First Christian Reformed Church of Sheldon. Jim began running the family farm at an early age after his father broke his leg. He spent his entire life doing what he loved most, farming; followed by his favorite hobby, collecting golf balls. His final 8 ½ years were spent at the Christian Retirement Home.
Jim was united in marriage to Jennie Harmelink of Archer, IA, at the Archer Reformed Church on December 30, 1977. They continued to live on the family farm. Jim enjoyed his farming, and Jennie enjoyed her homemaking. They both loved being aunt and uncle to many nephews and nieces and all the children they cared for through the years. Their door was always open to all who stopped on the yard. Jim lost his beloved wife, Jennie, on September 20, 2012.
Those left to cherish his memory are two brothers: Jerry (Linda) and Roger (Phyllis); four sisters: Kathleen (Andrew) Zylstra, Fran (Ed) Boer, Betty Elgersma, Marilyn (Bob) Hoogeboom, and numerous nieces and nephews. Also cherishing his memory are his ‘adopted son & daughter’, Jerry & Alyssa Postma and the entire Harmelink family.
He was preceded in death by his loving wife, Jennie (Harmelink) Smit; his parents, Joe and Winnie Smit; his brother-in-law, Jim Elgersma; his sister-in-law, Lois Postma; and brothers-in-law, Herb Hardwick and Dave Huitink.
To order memorial trees or send flowers to the family in memory of James Smit, please visit our flower store.