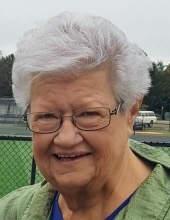 Visitation
will be after 4 P.M.
with family present from 5 – 7 P.M.
on Wednesday, August 1, 2018
at the Eldridge Family Funeral Home in Paullina.

MUSIC
C.D. “If You Could See Me Now”
CONGREGATIONAL HYMNS
“I Know Who Holds Tomorrow”
“The Old Rugged Cross”
Organist: Alyda Haack

Arrangements under the care of the
Eldridge Family Funeral Home; Paullina, Iowa
JANICE E. “SQUEEK” PETERSEN
Janice Ellen Petersen the daughter of Jake and Gertrude (Reekers) Mulder was born March 13, 1940 in Sheldon, Iowa. She attended Sheldon schools until 1951, when she moved with her family to Primghar to make her home. She continued her education in Primghar and graduated from Primghar High School in 1958. On September 4, 1965, she was united in marriage to Marvin Petersen at the American Reformed Church in Primghar, Iowa. After their marriage the couple settled on a farm in the Paullina area. For twenty years before her retirement Jan was employed at the Wide View Rest Home in Paullina where she worked in the kitchen and in the housekeeping department. She enjoyed her job and the interaction with the residents was very special to her. The couple’s retirement years were spent in the Paullina area on the family acreage. Janice passed away on Sunday, July 29, 2018 at the Unity Point St. Luke’s Hospital reaching the age of 78 years, 4 months and 16 days.
She was a member of the American Reformed Church in Primghar. She enjoyed spending time with her husband at Spirit Lake. Her children and especially her grandchildren were very important to her. In her spare time, she enjoyed crocheting.
Jan is survived by her husband, Marvin of Paullina, Iowa; three children, Kim (Kevin) Fey of Omaha, Nebraska; Mark (Cheri) Petersen of Spirit Lake, Iowa; Jody (Brian) Bennetzen of Lincoln, Nebraska; five grandchildren, Mallory and Seth Fey; Nichole (Jeremy) Hollowell and Jacob and Samuel Bennetzen; three great grandchildren, Jayden, Dillen and Hayli Hollowell also many other relatives and friends.
She was preceded in death by her parents, four brothers, Henry, Jake Jr., Warren and Robert.


When I come to the end of the day
and the sun has set for me
I don’t want the rites in a gloom filled room.
Why cry for a soul set free?

Miss me a little, but not too long
and not with your head bowed low.
Remember the love that once was shared-
Miss me, but let me go.

For this is a journey we all must take
and each must go alone.
It’s all part of the Maker’s plan,
a step on the road to home.

When you are lonely and sick of heart
go to the friends we know,
And bury your sorrows in doing good deeds-
Miss me, but let me go.
To order memorial trees or send flowers to the family in memory of Janice E. Petersen, please visit our flower store.