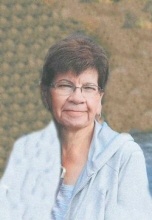 Visitation will be after 6:00pm Thursday
with the family present from 6:00 7:30 P.M. Thursday
at the First Christian Reformed Church in Sheldon.

CONGREGATIONAL HYMNS
What a Friend We Have in Jesus
It Is Well With My Soul
By The Sea of Crystal
Organist: Von Bolkema

After the graveside service relatives and friends are invited to join
the family in the fellowship hall of the church.

Janice Faye (Vander Plaats) Oertel was born to Louis and Matilda (Dykstra) Vander Plaats on November 27, 1950 in Sheldon, Iowa. She attended the Sheldon Christian School through the 8th grade and Hull Western Christian graduating in 1968. After high school Jan worked for Ritter Elevator until she married Charles Roger Oertel on April 17, 1970. The couple then lived in Sioux City and LeMars until moving to Loveland Colorado in 1981. She had an in-home daycare for a short time. But banking and numbers were her passion. In 2016, she retired.
Jan was amazing in the kitchen. Moms homemade potato salad and Grandma Oertels homemade cinnamon rolls were the best. She looked forward to preparing holiday meals for friends and family. She liked to sew and fish. She also enjoyed crafting, silk flowers were her specialty. As a couple, Rog and Jan enjoyed traveling and being involved with their grandchildren. In May of this year, Jan was diagnosed with AML. She courageously fought a short but intense battle to the very end. As Aunt Wendy said, Leukemia won the battle, but Jesus won the war and she is celebrating the victory in Heaven.
Left to cherish her memory, is her husband/best friend of 47 years, Rog children, Shon and Linda Oertel of Orange City, Iowa; Chad and Liz Oertel of Loveland, Colorado and Krystal and Clayton Lancaster of USAG Hohenfels, Germany; ten grandchildren, Amber, Charles Tyler and Lexie Oertel of Orange City, Iowa; Autumn, Garett and Jayden Oertel of Loveland, Colorado; Wyatt, Colton, Justin and Derrek Lancaster of Germany; two brothers, Larry and his wife, Wendy Vander Plaats of Hospers, Iowa; Ron and his wife, Jo Vander Plaats of Alton, Iowa and a sister-in-law, Nelva Vander Plaats of Sioux Falls, South Dakota; Rogers brother, Tom and his wife, Joyce Oertel of Virginia; also several nieces and nephews other relatives and friends.
She was preceded in death by infant twin sons, a son, Lonnie Oertel; parents, a brother, Richard Vander Plaats; Rogers parents, Charles and Velma Oertel; infant twin sister, Shirley, sister-in-law and brother-in-law, Janet and Dean Kelshiemer.
To order memorial trees or send flowers to the family in memory of Janice F. Oertel, please visit our flower store.