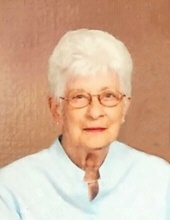 In lieu of flowers, memorials can be made out to
Zion St. John Lutheran School.

Arrangements are under the care of the
Eldridge Family Funeral Home; Paullina, Iowa.
JEAN L. HIBBING
Jean Warnke Hibbing, the daughter of Walter Warnke and Hilda (Fiddelke) Warnke Wester was born March 14, 1934 in Paullina, Iowa. She was baptized in the Christian faith on April 1, 1934 in the Zion Lutheran Church of Paullina. Jean received her grade school education at the Zion Lutheran Parochial School, was confirmed in May, 1947, graduating from Paullina High School in May, 1951.
After graduation, Jean procured employment in the Computer Processing Department at Armour & Company in Sioux City, Iowa. On March 12, 1954 she was united in marriage to Kelley Logan of California. The couple moved to Palo Alto, California where Jean continued her career. In the fall of 1970, Jean and her four children returned to Iowa. She was employed by First National Bank computer department in Sioux City and later transferred to Banks of Iowa in Cedar Rapids, Iowa. After retirement, she returned to this area, residing in Calumet, Iowa. Jean married Arnold Hibbing on June 7, 2008 in the Zion Lutheran Church in Paullina where both were members. This uniting of families brought a new dimension into Jean’s life. A life filled with caring love, joy and laughter from Arnie’s sons, daughters, grandchildren and extended family.
Jean enjoyed working in her flower beds, making quilts, creating garden stones, writing poetry, working on crafts and putting together memory books for her grandchildren.
Survivors include her loving husband, Arnold; one son, Scott (Michelle) of Trempealeau, Wisconsin; three daughters, Sherry Pappas (William) of Dakota Dunes, South Dakota, Brenda Suttles (Bobby) of Highlandville, Missouri, Karen Crist of California, Missouri; step-son, Doug Hibbing (Konnie) of Crestview, Florida; step-daughters, Barbara Rebentisch of Tiawan; step-daughter-in-law, Julie of Woodbury, Minnesota; sister, Betty (Curt) Rehder of Primghar, Iowa; sisters-in-law, Sue Warnke of Bellflower, California, Ruth Wester of Paullina and Louise Wester Harris of Jefferson, Iowa; seventeen grandchildren; nineteen great-grandchildren and many nieces and nephews.
She was preceded in death by her parents, Walter and Hilda Warnke; step-father, Knute Wester; brother, Don Warnke; step-brother, Jim Wester; step-son Russell Hibbing and granddaughter Desiree Crist.

God saw she was getting tired,
And a cure was not to be.
So He put His arms around her,
And whispered, “Come with Me.”

With tearful eyes,
we watched her suffer,
And saw her fade away.
Although we loved her dearly,
We could not make her stay.

A golden heart stopped beating,
Hard working hands to rest.
God broke our hearts to prove to us,
God only takes the best.
To order memorial trees or send flowers to the family in memory of Jean L. Hibbing, please visit our flower store.