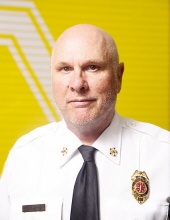 IN LOVING MEMORY OF
JERRY MEYER

MUSIC
CD ~ “Jealous Of The Angels”
“Amazing Grace, My Chains Are Gone”
Sung by: Tricia Meendering
Accompanied by: Wil George
CONGREGATIONAL HYMNS
“Here I Am Lord”
“I Was There To Hear Your Borning Cry”
Organist: Carleen Kehrberg

Jerry Meyer
Gerald “Jerry” Meyer the son of Charles Gene and Marilyn Ann (Haas) Meyer was born on August 29, 1955 in Neillsville, Wisconsin. He moved with his family to Ashton, Iowa in 1967. He received his education from Sheldon Schools and graduated from Sheldon High School in 1973. On November 8, 1975 he was united in marriage to Kris Lenox at St. Paul Lutheran Church in Sheldon. After their marriage the couple resided in Sheldon where Jerry worked construction and drove for Wonder Bread. He later went to further his education, receiving an Associate’s Degree in Engineering from NCC. After graduating he began working for Maintainer on August 29, 1988. Jerry passed away surrounded by his family at home on Tuesday, October 2, 2018 reaching the age of 63 years, 1 month and 3 days.
Jerry was a member of St. Paul Lutheran Church. Jerry was also a very dedicated fireman. He joined the department in November of 1979 and was promoted to Rescue Captain in 1986 and to 2nd Assistant Chief in 1992. He began as the Fire Chief of Sheldon Fire Company in 1999 and was active up until his passing. He was also a member of the Eagle’s Club and Sheldon Country Club. He enjoyed golfing, shooting at the range, fishing and watching his Green Bay Packers. But most of all, he loved his grandchildren and the time he spent with them.
Left to cherish Jerry’s memory is his wife of 42 years, Kris of Sheldon; two sons and their spouses, Paul and Tracy of Sanborn and Eric and Danielle of Chandler, Arizona; four grandchildren, Sophie, Presley, Sydney and Declan; his mother, Marilyn Meyer of Sheldon; brother David of Albion, Nebraska; brother-in-law Dean (Daleen) Seibold of Spirit Lake; also other relatives and many friends.
Jerry was preceded in death by his dad, Charles; sister Vicky Seibold; son, Matthew in infancy and his father and mother-in-law, Ray and Jean Lenox.
To order memorial trees or send flowers to the family in memory of Jerry Meyer, please visit our flower store.