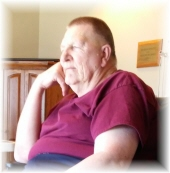 Jerry Mulder, age 82, of Sheldon, Iowa, passed away on Saturday, November 10, 2018 at Sanford Sheldon Care Center in Sheldon. Graveside Services will be Wednesday, November 14, 2018 at 3:00 P.M. at East Lawn Cemetery in Sheldon. Jason Vore officiating. Visitation will be Wednesday, prior to the Graveside Service, from 2:00 to 2:45 P.M. with the family present, at the Andringa Funeral Home Sheldon Funeral Service in Sheldon. Jerry James Mulder was born on February 5, 1936 in Sheldon, Iowa. He was the son of William and Gertrude (Moorlag) Mulder. Jerry attended school and lived his entire life in Sheldon. He enjoyed building bird houses and trains, riding his bicycle, listening to his scanner, going for car rides around Sheldon with his nephew, Robert and truck rides with his nephew, Rodney. He enjoyed going places and out to eat. He was very opinionated in life and liked to go out and have fun. Jerry passed away peacefully on Saturday, November 10, 2018 at Sanford Sheldon Care Center in Sheldon. The family gives their gratitude to those who cared for him. Those left to cherish his memories are his nieces, nephews and extended family. He was precede in death by his parents, William and Gertrude, and sister, Sylvia. In Loving Memory Of Jerry Mulder Born: February 5, 1936 Passed Away: November 10, 2018 Age: 82 years, 9 months and 5 days. GRAVESIDE SERVICE Wednesday, November 14, 2018 at 3:00 P.M. East Lawn Cemetery, Sheldon, Iowa OFFICIATING Jason Vore CASKET BEARERS Family INTERMENT East Lawn Cemetery, Sheldon, Iowa ARRANGEMENTS BY Andringa Funeral Home Sheldon Funeral Service Larry R. Andringa, Funeral Director

To order memorial trees or send flowers to the family in memory of Jerry Mulder, please visit our flower store.