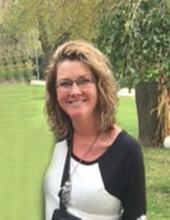 Services for Jodi Smith, age 55 of Primghar who passed away on Wednesday, March 2, 2022, at Sanford USD Medical Center in Sioux Falls, South Dakota. Her funeral service will be held at 10:30 A.M. on Monday, March 7, 2022, at Grace Lutheran Church in Primghar with Pastor John Adams ~ officiating.

Burial will be at Pleasant Hill Cemetery in Primghar.

Jodi Smith, the daughter of Gary Lee and Nancy Carol (Pingel) Jungjohan was born on July 6, 1966, in Cherokee, Iowa. She received her education from Sutherland School and graduated from Sutherland High School in 1984. On October 5, 1985, she was united in marriage to Brad Smith in Sutherland, Iowa. Jodi worked for Dr. Jongeward and Reineke for many years before Brad and Jodi opened Shortee’s Pit Stop in 2003. Jodi passed away on the 17th anniversary of her snowmobile accident March 2, 2022, at Sanford USD Medical Center in Sioux Falls reaching the age of 55 years, 7 months, and 26 days.
Jodi enjoyed golfing when she was able. She also could spend hours watching Dr. Phil or murder mystery shows. She enjoyed traveling with her family. Jodi spent a lot of time with her friends and family in Okoboji.
Left to cherish her memory are her husband, Brad and their daughters, Rylee (Ryan) Goosen of Paullina, Jaynee (Bob) Rushton and Maycee (fiancé, Connor Klatt) both of Primghar; two grandchildren, Jessa and Javin Goosen; mother-in-law, Loretta Smith of Primghar; siblings, Terri (Jimi) Dorland, Wendi (Bill) Felderman, Craig (Deb) Jungjohan, Cory (Shannon) Jungjohan, in-laws, Greg Smith, Steve (Elaine) Smith and Dan (Deb) Smith. She was also survived by nieces, nephews, other relatives, and many friends.
Jodi was preceded in death by her parents, Gary and Nancy Jungjohan and her father-in-law, Roger Smith.

To order memorial trees or send flowers to the family in memory of Jodi Smith, please visit our flower store.