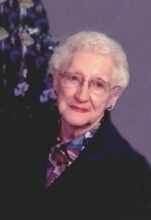 IN LOVING MEMORY OF
JOHANNA SLOTHOUBER

Visitation with family present will be from 5 7 P.M.
on Monday, February 27, 2017
at the Vander Ploeg Funeral Home in Boyden.

CONGREGATIONAL HYMNS
To God Be The Glory
How Great Thou Art
Rock of Ages
Organist: Leila Moret

After the graveside service relatives and friends are invited to
join the family in the fellowship hall of the church.

Memorials may be directed to the
First Reformed Church in Boyden.

JOHANNA SLOTHOUBER
Johanna Slothouber, the daughter of Bert and Jennie (Ver Meer) Bosma was born on December 21, 1918 on a farm near Middleburg, Iowa. Johanna and Cornelius (Casey) were married on December 29, 1937 at her parents home near Boyden, Iowa. They lived for many years on the Slothouber family farm near Boyden. When they retired from farming, they moved into a home in Boyden and enjoyed winters in Alamo, Texas. After Casey passed away on February 1, 1999, Johanna moved to Sheldon and later to Newton Village, a retirement home in Newton, Iowa. She passed away on Thursday, February 16, 2017 at the Newton Village reaching the age of 98 years, 1 month and 25 days.
Throughout her life, Johanna enjoyed painting, quilting and music. She shared her love of the piano as she taught many children. Her musical talent provided joy for many as she was an accompanist for various singing groups and church organist-pianist in Boyden and Alamo, Texas until she was over 80 years old. Her oil paintings and hand quilted masterpieces are treasured by family and friends.
She was a member of Boyden First Reformed Church and a regular attender of Sheldon First Reformed Church, Alamo Rec Veh Community Chapel, First Baptist Church in Alamo, Texas and Chapel at Newton Village in Newton, Iowa where she frequently filled in as organist.
Survivors include her son, Kenneth and his wife, Judie Slothouber of Newton, Iowa; daughter, Jean Hoffman of Seattle, Washington; sister, Gertrude Brouwer of Sanborn, Iowa; five grandchildren, Angie (Slothouber) and husband, Kelly Wilderman, Kurt Slothouber and wife, Kelli, Julie (Hoffman) Frame and husband, Darrel, Laura (Hoffman) Duke and husband, Chris, and Kent Hoffman and wife, Carolyn; ten great-grandchildren and two great great grandchildren also other relatives and friends.
She was preceded in death by her husband, son-in-law, Jerry Hoffman, parents, infant sister, brother, Marvin and his wife, Dorothy Bosma and a brother-in-law, Edwin Brouwer.
To order memorial trees or send flowers to the family in memory of Johanna Slothouber, please visit our flower store.