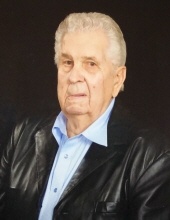 MUSIC
“Peace In The Valley”
“The Old Rugged Cross”
Sung by: Mary Jo Huls
CONGREGATIONAL HYMNS
“In The Garden”
“How Great Thou Art”
Organist: Deanna Tiedeman

After today’s graveside service, relatives and friends are
invited to join the family in the fellowship hall of the church.


John Richard Hollander, the son of John C. and Ella (Berger) Hollander was born on July 29, 1924 in Sibley, Iowa. He received his education from a country school outside of Sibley until 8th grade. He met Darlene DeBoer in Boyden, Iowa and the couple married on June 7, 1957 in Spencer, Iowa. The couple moved to South Dakota for a short period before moving outside of Boyden where John farmed and milked cows. The couple remained on the farm until moving to Fieldcrest in February of 2015. Darlene preceded John in death on February 6, 2017. John remained at Fieldcrest until his passing on Monday, April 9, 2018 at Sanford Sheldon Medical Center reaching the age of 93 years, 8 months and 10 days.
John was an active member at St. Paul Lutheran Church in Hull where he belonged to the men’s group, served on the cemetery board and other positions within the church. John also served on the Co-Op Board. He enjoyed telling jokes and stories, taking care of their children as they grew up and pampering Darlene.
Left to cherish John’s memory is his children and their spouses, Rick and LaWana Hollander of Cameron, Wisconsin and their family, Christopher (Laura) their children, Delilah and Erin, Joshua and his son, Colton, Jeremy (Kara) and their children, Tyson and Haylee and Renae and Brett Bahrenfuss of Sioux Falls, South Dakota and their family, Derek (Ashley) and daughter, Teagyn and Dalton Bahrenfuss; two sisters, Elaine Brandhorst of Hudson, Iowa and Alta Mae Claus of Spencer, Iowa; brother-in-law, Harold De Boer of Olathe, Kansas; sister-in-law, Dorothy (Ivan) Van Ommeran of DeWitt, Iowa; also nieces, nephews, other relatives and friends.
John was preceded in death by his parents; wife; great grandson, Mason Hollander; two brothers, Rudy and Ernest Hollander.
To order memorial trees or send flowers to the family in memory of John R. Hollander, please visit our flower store.