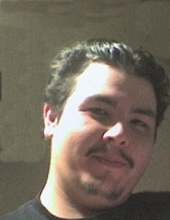 Services for Joshua A. Rook, age 32, of Sheldon, Iowa who passed away on Saturday, April 7, 2018 at Sanford Sheldon Medical Center. His memorial service will be at 2:00 P.M. on Tuesday, April 17, 2018 at Grace Lutheran Church in Primghar with Pastor Kim Wermersen ~ officiating.
Visitation with family present will be from 5 - 7 P.M. on Monday, April 16, 2018 at the Eldridge Family Funeral Home in Primghar.
Burial will be at a later date.

Joshua Andrew Rook was a remarkable young man. 32 years was far too short for a friend as wonderful as Josh. Josh was many great things, but the most amazeballs thing he could’ve been was a great friend and brother. He was definitely both.

Joshua Andrew Rook, son of Andrew LaRance and Kathleen Rook, was born on Valentine’s day just 32 years ago. He passed away April 7th 2018. Josh was preceded in death by two of his children Jayden Rook and Jarren Rook. Also, his maternal grandmother Janet Brown. Josh was survived by his three brothers Jeremie Rook, Jon Oldenkamp, and Jacob Rook. His sister-in-law Brittany Rook and nephew Jax Rook. His four children Mea Rook, Jaxon Rook, Mirra Rook, and Jagger Rook. He was also survived by his aunts and uncles Elaine Rook, Guy Rook, Terri Rook, and Robbie Rook. His Grandfather Mark Brown. His father Andrew LaRance and his mother Kathleen Rook. Joshua grew up in Northwest Iowa. He went to school at South O’Brien high school and graduated in 2004. Josh worked at Link MFG. in Sioux Center, Iowa as a welder/fabricator. Josh was very passionate about working with his hands.

Josh was a kindred spirit, he was so down to earth. Never fake. He was never ashamed or afraid to be exactly who he was. He was so loved by everyone. Him and his brothers all had an unbreakable bond. Especially his brother Jeremie. They weren’t only brothers. They were best-friends. They did everything together. So many great memories were made that everyone will cherish, the best memory was one day when Josh and Jeremie got off work. They both worked nights, so they came home early in the morning. They decided to sit on the steps of their shared apartment complex. They spent hours just talking. Together they talked themselves into the morning,watching the beautiful sunrise, just enjoying each other’s company. Josh and Jeremie were inseparable. Together they went frolfing and fishing. Josh absolutely loved the outdoors. Jeremie and Josh shared interests beyond brotherhood. Josh was into drawing and doing tattoos. In fact he even gave Jeremie his very first tattoo. They spent many an hour playing video games and enjoying the company of Josh’s dog, Taz. Josh and Jeremie came up with the nickname “The amazing Raztasticles”! Together they would enjoy throwing back a few cold ones while they worked on Josh’s pride and joy, his truck. Josh was a selfless, giving man. His heart was so big, he loved everyone who gave him the chance. His smile would make the whole room light up. Everyone was happy when Josh was around. No matter who you were, he made it a point to make you happy. He brought happiness to everyone who had the pleasure of knowing him.
To order memorial trees or send flowers to the family in memory of Joshua A. Rook, please visit our flower store.