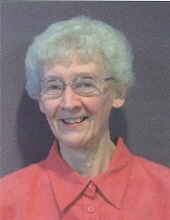 A Family burial will be held in the Sheridan Township Cemetery in Boyden, Iowa.

The arrangements are under the care of the Andringa Funeral Home in Sheldon.
Online condolences may be made to the Family at www.vanderploegfunerals.com


Arrangements are under the care of the Andringa & Vander Ploeg Funeral Homes, Sheldon, Iowa.
Joy Jean Van Velzen the daughter of Nic and Nell (Kwikkel) Rowenhorst was born October 21, 1926, in Boyden, Iowa, where she received her education and graduated from Boyden High School. On December 4, 1945, she was united in marriage to Henry Van Velzen. They spent several years in the Matlock, Iowa and Tyndall, South Dakota, where Henry passed away. Joy and children Galen and Barbara moved to Sheldon in 1965. She was employed for 19 years at Northwest Iowa Activity Center and Northwest Enterprises. She had made her home in the Christian Retirement Home and later at Cobble Creek Assisted Living in Sheldon. She passed away on Friday March 25, 2022, at Cobble Creek reaching the age of 95 years five months and four days.
She was a member of the Bethel Reformed Church in Sheldon and had been a volunteer at Oak Park Care Center in Sheldon.
Joy is survived by a son Galen and his wife Renee of Sheldon, Iowa; a daughter Barbara and her husband Steve Ulrich of Milford, Iowa; 4 grandchildren Nicole Van Velzen of Lawrence, Kansas, Hilary (Daniel) Engelsman and children Blake, Reese and Josie Engelsman of Sioux Falls, South Dakota; Parker Ulrich of Chicago, Illinois and Lexy Ulrich of Omaha, Nebraska; one sister LaVonne Meyn of Sheldon, Iowa, and a host of other relatives.
She was preceded in death by her husband, parents, sister Delores Vander Wilt and brothers-in-law Cliff Vander Wilt and Kenneth Meyn.


To order memorial trees or send flowers to the family in memory of Joy Van Velzen, please visit our flower store.