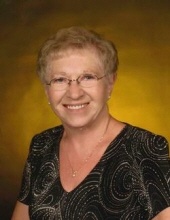 IN LOVING MEMORY OF
JUDITH A. STUEVEN

In lieu of flowers, memorials may be directed to:
Hospers Dialysis Center and Fieldcrest Assisted Living

After todays graveside service, relatives and friends are invited to join the family in the fellowship hall of the church for a time of fellowship and visitation.

Judith Ann Stueven, the daughter of Julius J. and Whilhelmina (Weststeyn) Levering was born on November 7, 1939 in Doon, Iowa. On February 16, 1961 she was united in marriage to Loren H.C. Stueven in Boyden, Iowa. After their marriage they made their first home in Matlock and later moved to Boyden in 1970. Her number one job was raising her six children and attending all of their events. During this time, she also worked part time at Boyden Elementary. Later she owned and operated Stus Chick Haven, became a part of the cleaning ladies crew, and used her baking talents at Prairie Queen Bakery. On November 30, 2016 the couple moved to Fieldcrest Assisted Living in Sheldon. Judith passed away on Thursday, November 2, 2017 reaching the age of 77 years, 11 months and 26 days.
Judy was a part of St. John Lutheran Church in Boyden, and she was a very active member. She loved being a part of Dorcas, singing in the church choir, teaching Sunday School, and especially loved performing skits at the local nursing homes. She had eyes to see needs of the people around her and never hesitated to fill those needs. Whether it meant cooking a meal, laying carpet, or building/ improving things in the home, she just did it. She spent her time baking, cooking for family gatherings, being a part of Senior Saints and Red Hats, and making ceramics. A treasured memory is that every year at Christmas time each grandchild got to pick their new snow baby ceramic off of the Christmas tree. Family was a very important part of her life and she loved her family with a love that came from the Father. She loved the Lord and led her family to love Him too.
Those left to cherish Judiths memory is her children, Doug (Carol) Stueven of Spirit Lake, Iowa, Rich (Cheryl) Stueven of Spencer, Iowa, Juanita (Doug) Rodger of Sheldon, Bob (Kelli Steggall) Stueven of Mizpah, Minnesota, Michelle (John) Sachen of Sheldon; daughter-in-law, Stacey Stueven of Pierre, South Dakota; sixteen grandchildren; five great grandchildren; siblings, Mary (Bernie) Pranger of Port Thompson, Washington, Roger (Diane) Levering of Aurora, Nebraska, Hank (Virginia) Levering of Atkinson, Nebraska and Wilene (Larry) Lucinian of Fresno, California; also nieces; nephews; other relatives and friends.
Judith was preceded in death by her husband, Loren; parents; son, Gene; son-in-law, Brian Holtrop and one brother, Jerry Levering.
To order memorial trees or send flowers to the family in memory of Judith A. Stueven, please visit our flower store.