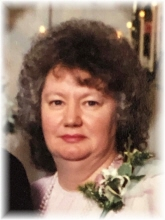 Judith Ann Huffman, age 76, of Sheldon, Iowa, passed away on Tuesday, November 20, 2018 at Sanford Medical Center in Sioux Falls, South Dakota. Funeral Services will be Monday, November 26, 2018 at 11:00 A.M. at Parkview Assembly Church in Sheldon. Rev. Ken Snyder officiating. Burial to follow at East Lawn Cemetery in Sheldon. Visitation will be Monday, prior to the Funeral Service, from 9:30 A.M. to 10:45 A.M. with the family present, at Parkview Assembly Church. Judy Huffman was born March 31, 1942 on a farm near Boyden, Iowa to Pete Statema and Maxine Fiihr. She moved to Wichita, Kansas with her mother when she was young, but over the years made many trips by train back to northwest Iowa where she spent summers with her grandparents, Floyd and Frieda Fiihr. When she was 15, she moved to Sheldon permanently. There she met Soly Huffman, whom she married shortly after high school. Judy and Soly were together over 31 years until his death in 1992. Over the years, Judy worked at Wolfe's Department store in downtown Sheldon and later as an aide at the elementary school. For a number of years, she ran Wee Learners Preschool out of her home. She also served as custodian at Parkview Assembly, where she attended most of her adult life and enjoyed many special times with family and friends. Judy's faith was a priority in her life and she always made sure her family was in church when the doors were open. She loved to sing, and even when her memory faded, Judy always recognized and responded when she heard the old hymns. Though Judy wasn't extremely outgoing socially, she was friendly to everyone, with a sharp wit and dry sense of humor, which was with her until the end. Judy loved to shop at the Village Treasure Chest in Sheldon and be at home with family where she would sit, talk and rock for hours. She raised three boys and many pets over the years. She was always the last to want another pet and the first to be sad when they were gone. Judy spent her last year at Fieldcrest Memory Care in Sheldon, and died November 20, 2018 in Sioux Falls, South Dakota. She was preceded in death by her husband, Soly, her parents and grandparents. She is survived by her three sons: Carey (Lorri) of Des Moines, Terry (Dawn) of Lincoln, and Jeff (Alicia) of Sheldon; grandchildren: Jamison, Elliana, Isabella, Alexandra, Anderson and Celtion; brother, Michael Conkey in Cedar Rapids. Judy's Funeral service is at 11:00 am on Monday, November 26, 2018 at Parkview Assembly in Sheldon, followed by burial at East Lawn Cemetery and a luncheon back at the church. Family will be present to greet friends prior to the service from 9:30 to 10:45 am.

To order memorial trees or send flowers to the family in memory of Judith Ann Huffman, please visit our flower store.