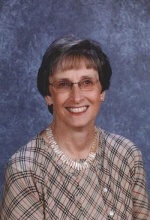 Visitation with family present will be
from 5 to 7 P.M. Wednesday, November 9, 2016
at the Eldridge Family Funeral Home in Primghar.

MUSIC
Come to Jesus
I Was There to Hear Your Borning Cry
Sung by the Grace Lutheran Church Praise Team
CONGREGATIONAL HYMNS
# 784 You Have Come Down to the Lakeshore
# 779 On Eagles Wings
Organist: LaNan Eldridge

JUDITH C. PARTLOW
(May 10, 1947 October 30, 2016)
Judith Cheryl (Clark) Partlow, the daughter of Randolph and Mary (Russell) Clark, was born on May 10, 1947 in Kansas City, Missouri. She graduated from North Kansas City High School in 1965, and then attended Northwest Missouri State University in Maryville, Missouri studying elementary education and met her husband Richard Partlow. The couple married on June 1, 1968 in Kansas City, Missouri. They lived and taught in Oregon, Missouri, then moved to Fontanelle, Iowa where she taught first grade. They moved to Denison, Iowa for two years before moving to Maryville, Missouri. The couple moved to Primghar, Iowa where they raised their family for 40 years. Judy served her community as a teacher in the Primghar and South OBrien School Districts in many areas, sharing her love of learning with many children throughout her career. She spent her retirement years with her husband Dick following the Northwest Bearcats football team, traveling, and enjoying her 9 grandchildren. She passed away peacefully surrounded by her loved ones on Sunday, October 30, 2016 reaching the age of 69 years, 5 months and 20 days.
Judy was a very active member of Grace Lutheran Church, where she began a preschool program in the late 1970s and later returned to teach at the preschool after her retirement from South OBrien. She served Grace Lutheran as a council member, sang with the praise team, and helped wherever she was needed.
Judy truly loved her grandchildren and took an active interest in their activities. Together with Dick she traveled to as many their events as possible and followed them online when travel wasnt possible. She loved to have the grandkids attend Vacation Bible School in the summers and enjoyed family gatherings. She loved to share her talents of sewing, cooking, painting and crafting with her children and grandchildren.
Judys memory will continue to be cherished by her husband of 48 years, Richard of Primghar; three children, Sarah (Chris) Cline of Smithville, Missouri, Becca (Josh) Moermond of Sutherland, Iowa and Ben (Kristene) Partlow of Gillette, Wyoming; nine grandchildren, Hannah, Noah, Madelyn, Case, Dain, Gabe, Ella, Karver, and Zane; her brothers Steve (Kathy) Clark of Overland Park, Kansas, Paul Clark of Wichita, Kansas, her brother-in-law, Roger (Diana) Partlow; nieces and nephews; and many friends.
She was preceded in death by her parents, Randy and Mary Clark, and her in-laws, Duane and Marge Partlow.
To order memorial trees or send flowers to the family in memory of Judy C. Partlow, please visit our flower store.