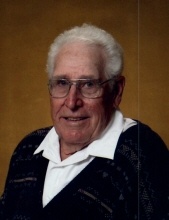 IN LOVING MEMORY OF
JULIUS A. HOGER

CONGREGATIONAL HYMNS
“The Lord Is My Shepherd”
“In My Father’s House”
“In The Garden”
“How Great Thou Art”
“I Am Jesus’ Little Lamb”
“I Know My Redeemer Lives”
“Jesus Loves Me”
“Doxology”
Organist: Verla Hibbing

Julius A. Hoger
Julius Albert Hoger, the son of Emil and Anna (Meyer) Hoger was born on March 6, 1927 on the family farm, rural Paullina. He was baptized on April 3, 1927 and confirmed on May 18, 1941 all at Zion Lutheran Church. He attended Zion Lutheran School through the 8th grade. On April 4, 1945 he enlisted into the United States Navy serving as a Seabee and was honorably discharged on July 7, 1946. After the war he helped build the gas plant in Paullina and Oklahoma. On October 3, 1948, Julius was united in marriage to Elizabeth (Betty) Jane Chesley in Sutherland, Iowa. After their marriage the couple farmed south of Paullina for 2 years then farmed near Royal for two years. In 1952, they returned to the farm south of Paullina where they continued to farm until his death. Julius spent his whole life farming beginning at the age of 7 when his father passed away. He was known for his 1976 skid loader that he used to farm and to do chores. Julius passed away on Sunday, October 28, 2018 at Mercy Medical Center in Sioux City, reaching the age of 91 years, 7 months and 22 days.
Julius was a lifetime member of Zion Lutheran Church. He enjoyed going to the Sheldon Sale Barn every Thursday. He was a caretaker for Prairie View Cemetery in Paullina for 29 years. He also enjoyed telling stories around the kitchen table to his grandchildren and spending time with his family.
Left to cherish his memory is his wife of 70 years, Betty; children, Julie (Steve) Grayson, Larry (Dee) Hoger both of Paullina, Nancy (Bruce) Rogge, Marcy Jo (Alan) Oehmke, both of Palmer, Kansas and Dee Fritz (Mike Tesch) of Paullina; 18 grandchildren, Kara, Steph, Holly, Levi, Hope, Dylan, Luke, Dustin, Brent, Aaron, Kathy, Traci, Dana, Lauren, Brian, Rachel, Eric and Jason; 33 great-grandchildren; sister-in-law, Lorraine Hoger of Spencer; also many nieces; nephews; other relatives and friends.
Julius was preceded in death by his parents; two children, Jan and Jane; son-in-law, Jay Fritz; two brothers, Arthur and Harold; five sisters, Alice, Leona, Esther, Mavis and Ruth.
To order memorial trees or send flowers to the family in memory of Julius Albert Hoger, please visit our flower store.