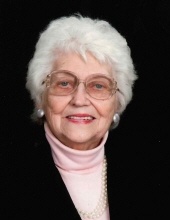 After the today’s graveside service relatives and friends are invited
to join the family in the fellowship hall of the church.

Arrangements under the care of the
Vander Ploeg Funeral Home; Sheldon, Iowa.
JUNE MAXINE DEN HARTOG
June Maxine Den Hartog was born to William Kwikkel and Tena (Seefus) Kwikkel of Boyden, Iowa, on June 16, 1924 as the second of three children. She graduated from Boyden High School and on September 16, 1942, married Elmer Marvin Den Hartog of Sheldon, Iowa, in the Little Brown Church in Nashua, Iowa. The couple moved to California where Elmer worked on shipbuilding at Terminal Island in the Los Angeles area. They moved back to Iowa in 1943, so he could enlist in the Army Air Corps. During WWII, as Elmer was based in Italy and flew 55 missions as a ball-turret and waist gunner on a B-24, June did her part in Omaha, NE, where she worked in a war plant, grinding radio crystals for Walkie Talkies for the service men. When Elmer returned from the service, they moved first to Boyden, and later to Sheldon. June worked at various jobs through the years – at the Sheldon hospital and nursing home as an aide and doing physical therapy – and later at Wolff’s Department Store. She was an enthusiastic volunteer – working on sets for many productions of the SHS Theater Department, as a Board Member and later as President of the Prairie Arts Council, helping with activities for the nursing home for over 30 years – and contributing her time and talents to many other community organizations and events. She was an active member of the Democratic Party and very proud to have personally met Michele Obama when Barack Obama was campaigning in NW Iowa.
June was a long-time member of the Sheldon United Methodist Church and enjoyed services and especially singing those old-time hymns. Though she rarely sang in public, she often sang at home, harmonizing with her daughters as they did the dishes – and singing out the great Christmas songs on Christmas Eve as her Dad, Bill Kwikkel, accompanied with his whistling. June loved to learn anything. In those days before there was Wikipedia, she would enthusiastically direct her children and grandchildren who had any questions to consult the maps, dictionaries, and encyclopedias she kept in the house. She was a dedicated and fun mother for four rambunctious children and managed to keep them all busy and (mostly) out of trouble while Elmer was driving truck long-distance across the U.S. She never skydived with Elmer. But she enjoyed many rides in Elmer’s planes, including in one of his open cockpit biplanes.
She was preceded in death by her husband, Elmer Marvin Den Hartog; her daughter, Patrice Yvonne Den Hartog; her parents; her brother, Billy Kwikkel; and her sister, Lucille Diekevers.
June was one-of-a-kind and will be greatly missed by her children – Pam Den Hartog, Patric Den Hartog, Craig Den Hartog and his wife, Patricia; her grandchildren Tina and Marc Den Hartog, Justin Madsen, Zachary Madsen and his wife, May, Melissa Farr and her husband, Tom, and Jameson and Bryan Den Hartog and his wife, Nora Schlesinger; great-grandchildren Sebastian, Spencer and Abigail Madsen and Jack Den Hartog, and sister-in-law, Florence Kwikkel
To order memorial trees or send flowers to the family in memory of June M. Den Hartog, please visit our flower store.