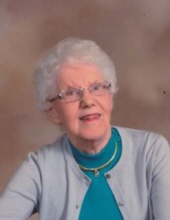 Memorials may be directed to the International Essential Tremor Foundation


The service will be live streamed on the Eldridge/Vander Ploeg Funeral Homes Facebook page https://www.facebook.com/eldridgefamilyandvanderploegfuneralhomes

And later today can be viewed later on our Website

Social distancing guidelines will take place
and Mask will be required for the visitation and the graveside service at the cemetery.

Arrangements are under the care of the Vander Ploeg Funeral Home – Sheldon.
Online condolences may be sent to www.vanderploegfunerals.com

IN MEMORY OF
KATHALEEN J. MASTBERGEN

MUSIC
“It Is Well With My Soul”
Sung by: Pastor Paul Van Maaren
CONGREGATIONAL HYMN
“What A Friend We Have In Jesus”

Memorials may be directed to the International Essential Tremor Foundation

Kathaleen J. Mastbergen, the daughter of William and Hattie (Mouw) Bloemendaal was born November 29, 1923 in Hospers, IA. She received her education in a country school near Hospers and graduated from Hospers public high school in 1942.
After graduation she attended Westmar in Le Mars to become a country schoolteacher. Prior to being married she taught one year in Sioux County and then two years in Baker Township, O’Brien County. After a family move to a farm near Spencer, she was employed at the Dudna Drug and Gift store in Spencer.
Kathaleen was united in marriage with Henry Mastbergen on January 27th, 1948. The couple briefly resided in Sheldon before they began farming near Matlock, IA. In 1949, they purchased an acreage by Matlock. Kathaleen worked in the office of the Sheldon Sales Barn every Wednesday for several years prior to starting her family.
Henry and Kathaleen remained on the farm for 35 years. In 1981, they moved to Sheldon into a house designed by Kathaleen. They retired after 40 years of farming.
Henry and Kathaleen enjoyed working in their yard and planting beautiful flowers. They also enjoyed traveling abroad together and spending their winters in Mesa, AZ. They bought and enjoyed a second home in 1989 at Carriage Manor Park in Mesa. They traveled to Arizona each fall until Henry’s death in 2005. Kathaleen moved to Fieldcrest in 2012.
Kathaleen enjoyed gardening, flowers, games of all kinds and reading. Reading God’s word was a daily discipline for her. She worshipped at First Reformed Church and at home. Her children have memories of her listening to Christian radio from early on. Raising children who knew and loved Jesus Christ was the most important endeavor in Kathaleen’s life. Her children are very grateful for her perseverance in passing her faith on to her grandchildren and great grandchildren as well.
Left to cherish her memory are her 3 three daughters and their husbands, Holly and Dennis Janssen of Rockwell, TX; Bonnie and Jeffry Mitchell of Burnsville, MN; Connie and Larry Van Meeteren of Sheldon, IA; 9 grandchildren, Rachel (Anthony) Lorenz; Robin (Timothy) Basselin; Kiel (Vivana) Janssen; Todd (Anna) Mitchell; Grant (Allison) Mitchell; Angela (Justin) Schuiteman; Julia (Mike) Henrichs, Kayla and Steven Van Meeteren; 17 great-grandchildren, Risa, Karis, Quinn and Case Basselin; Reid and Eva Lorenz; Samuel, Isaac and Jay Mitchell; Dounte, Donovan, Bailey, Mataya and Daxton Schuiteman; Cora, Ava and Emma Henrichs. one sister, Darlene Krull of Battle Lake, MN and other relatives and friends.
She was preceded in death by her husband, her parents, a brother, Ernest Bloemendaal; and sister, Edna Zoet.
To order memorial trees or send flowers to the family in memory of Kathaleen Joy Mastbergen, please visit our flower store.