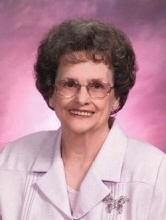 IN LOVING MEMORY OF
KATHRYN SANTEMA

Kathryn (Rens) Santema was born November 22, 1926 to Bert and Alice (Peters) Rens on a farm near Orange City, Iowa. She passed away on October 28, 2016 at Sanford Senior Care in Sheldon, Iowa at the age of 89 years, 11 months and 6 days.
She attended rural schools for eight grades. The family lived on a farm 4 miles south of Newkirk, Iowa. She attended Newkirk High School, graduating in 1944. After high school she went to summer school at Westmar College in LeMars, Iowa. After graduating from there she taught in a rural one-room school. She had 12 students and taught all eight grades. While she was teaching her boyfriend Bernard Santema served in the U.S. Navy. He was discharged in 1946. They were married on January 16, 1947. They lived on the Santema farm near Sioux Center, Iowa for one year and then moved to Sheldon, Iowa where they raised their four children, three boys and one girl. When the youngest child was in grade school, Kathryn began working at the Swansons Grocery Store (now Hy-Vee) as a checker. She worked there for twenty-one years and for the last fifteen years she was head bookkeeper. She retired in 1985.
She was an active member of the Bethel Reformed Church in Sheldon for over 65 years. She loved her Womens Bible Study group.
Grateful for having shared her life are her four children: Harlyn (Kay) Santema of Sioux Falls, South Dakota, Randy Santema of Conrad, Iowa, Judy Larsen of Council Bluffs, Iowa and Bob (Norma) Santema of Harrisburg, South Dakota. She is also survived by one sister, Jean Vermeer of Buena Vista, California and one brother, Al Rens of Sheldon, Iowa. Also surviving is her six grandchildren: Jamie Knowlton of Council Bluffs, Iowa, Jessica Beltran of Council Bluffs, Iowa, Bryan Santema of Sioux Falls, South Dakota, Shontelle Vidinghoff of Phoenix, Arizona, Michael Santema of Pasadena, California and Jessica Porter of Harrisburg, South Dakota; nine great grandchildren, Dylyn Beltran, Ethan and Grant Santema, Ryan and Tyler Porter, Jordan and Connor Knowlton, Annika and Bria Vidinghoff.
She was preceded in death by her husband, Bernard Santema; her parents, Bert and Alice Rens; sister, Hermina Bosma and brother-in-law, Harry Bosma; brother, John Rens; grandson, Kelly Feikema and sister-in-law, Shirley Rens.
To order memorial trees or send flowers to the family in memory of Kathryn Santema, please visit our flower store.