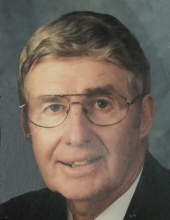 Visitation with family present
will be from 5 – 7 P.M. on Wednesday, August 29, 2018
at the Eldridge Family Funeral Home in Primghar.

Arrangements under the care of the
Eldridge Family Funeral Home Primghar, Iowa.

KENNETH E. SAMPSON
Kenneth Eldon Sampson passed away peacefully on Monday August 27, 2018 at the Prairie View Retirement in Sanborn, Iowa reaching the age of 89 years, ten months and three days. He was the son of Robert and Mildred (Hirt) Sampson was born on October 24, 1928 in Hartley, Iowa. He graduated from Hartley High School in the class of 1946. Kenneth was united in marriage to Phyllis Hagedorn on March 6, 1949 at the Methodist Church in Hartley, Iowa. They started their married life on a farm just outside of Sanborn, Iowa. In 1962 they moved to a farm north of Primghar, Iowa. In 1982 they built a home on the northeast corner of Primghar where they would retire. During the last few years they have resided in the Prairie View Manor Assisted Living in Sanborn, Iowa.
During his farming career he raised cattle, hogs, corn and soybeans. He loved talking to people. He was interested in O’Brien County and Iowa history. He co-owned airplanes and enjoyed going to flight breakfasts in his young married life. He loved John Deere Equipment with his prize purchase of a 7520 4-wheel drive. He was always proud of his sons that followed him in his farming career and now two grandsons. Besides farming, he served on a number of boards and had many hobbies involving collection of antique cars, pickups, tractors, Cushman scooters and John Deere bicycles. He loved going to flea markets to see if there was anything else he needed. Kenny and Phyllis spent nearly twenty years wintering in Arizona with their friends. The couple loved to take day trips with their grandchildren to the Waterman Creek, the railroad in Boone, Little House on the Prairie, pumpkin picks in the fall and Easter egg hunts in the spring. Kenneth was a member of the United Church of Primghar and served on many committees and especially the building committee when the current church was constructed. He was faithful, loving husband to Phyllis and was proud of his kids and grandchildren and especially loved spending time with them.
Kenneth is survived by his wife Phyllis of Sanborn, Iowa; three sons; Galen and his wife Julie Sampson of Primghar, Iowa; Craig and his wife Sharon Sampson of Primghar, Iowa and Mark and his wife Debra Sampson of Hartley, Iowa also nine grandchildren and ten great grandchildren; one brother Byron (Dorothy) Sampson of Okoboji, Iowa; three sisters Marilyn Tesch of Hartley, Iowa, Elsin Petersen of Okoboji, Iowa and Shirley (John) Ney of Okoboji, Iowa; also other relatives and many friends.
He was preceded in death by his parents, his in-laws’, brother, Milton and sister-in-law, Arlene Sampson and two brothers-in-laws, Emory Petersen and Merlon Tesch.
To order memorial trees or send flowers to the family in memory of Kenneth Sampson, please visit our flower store.