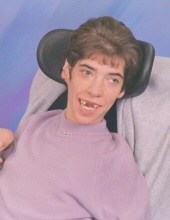 IN LOVING MEMORY OF
KIMBERLY A. FISCHER

Kimberley Ann Fischer the daughter of Marlin and Dorothy (Carlson) Fischer was born September 6, 1975 in Primghar, Iowa. She received her education first in in Cherokee and later graduated from River Valley School in Rock Valley, Iowa. She made her home at Hope Haven in Rock Valley and later moved to Village Northwest in Sheldon to make her home for the last 18 years. Kimberly enjoyed many things listening to music, horses, chocolate milkshakes, walks in her wheelchair, Alvin and the Chipmunks, fireworks, and when she was younger the stories her mother read to her. She passed away on Saturday June 4, 2022 at the Sanford Medical Center in Sioux Falls, South Dakota reaching the age of 46 years seven months and twenty-eight days.
She is survived by her brothers and sisters Douglas (Sandi) Carlson of Orange City, Iowa; Steven (Donita) Carlson of Sutherland, Iowa; Dianna (Adrian) Collins of Carrollton, Texas; Barbara (Doug) Mathisen of Gilbert, Arizona; Valerie Fischer of Hartley, Iowa; Douglas Fischer of Apache Junction, Arizona; a sister in-law Jane Carlson Miller of Nappanee, Indiana; two brothers-in-law Dave Orthmann of Sutherland, Iowa and Martin Stofferan of Primghar, Iowa also many cousins and other relatives and friends.
She was preceded in death by her parents Marlin and Dorothy, two sisters Deborah Orthmann and Sandra Stofferan two brothers Dennis Carlson and infant brother William Fischer.


To order memorial trees or send flowers to the family in memory of Kimberly Fischer, please visit our flower store.