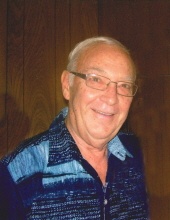 MUSIC
“Amazing Grace”
“How Great Thou Art”
“Jesus Loves Me”
“What A Friend We Have In Jesus”
Pianist: Arlyce Oosterhuis


After the graveside service relatives and friends
are invited to join the family in the
fellowship hall of the church.

Larry Dean Harms, the son of Taus and Cecilia (Heginger) Harms was born August 21, 1940 in Thornton, Iowa. He received his education through the 8th grade in a country school near Meservey, Iowa, and later on he received his high school diploma from the LaSalle University of Chicago. In 1960, Larry married his first wife, Barbara Beenken. In 1961, they had a son, Kent and in1963 they had a daughter, Lori. His entire work career was involved in the cheese making industry. He started his career in 1959 at the Hampton Cooperative Creamery. In 1963, he was transferred to Goldfield Coop Creamery in Goldfield, Iowa. In 1970, while working for AMPI, Larry won first place at the Wisconsin Cheese Makers Association World Cheddar Cheese Contest for making the best cheese in the world. He was transferred to Ryan, Iowa in 1974, as the plant superintendent of the AMPI cheese plant. He was there a short time and then was transferred to the Sanborn, Iowa AMPI cheese plant to help start making cheddar cheese, and shortly after that he became the Divisional Manager. In 1992, he was asked to be in charge of the Sibley AMPI plant, so he managed both plants until 2002 when he retired after 39 years. In 1987, he married his second wife, Maxine Smit. Larry passed away on Sunday, May 15, 2022 at the Sanford Medical Center in Sioux Falls, SD, reaching the age of 81 years, 8 months and 24 days.
Larry was a member of St. Paul Lutheran Church in Sheldon. He enjoyed spending time with family and friends, fishing, golfing riding his motorcycle and gardening. Larry and Maxine also enjoyed 15 winters in Weslaco, Texas. They did a lot of dancing, made many friends and many memories.
He is survived by his wife of 35 years, Maxine; his son, Kent (Jane) Harms of Cedar Rapids, IA; a daughter, Lori (Jeffrey) Queck of Sanborn, IA grandchildren, Katie (Kelly) Harms of Kernersville, NC; Sarah (James) O’Halloran of Adel, IA; Erin (Tyler) York of Des Moines, IA; Matthew Queck of West Des Moines, IA; Leah Queck of Sioux Falls, SD; great-grandchildren, Parker and McKenna O’Halloran, and Ryker Harms; he is also survived by his siblings, Harry (Barb) Harms of Hampton, IA; Gary Harms of Belmond, IA and Jerry (Marlene) Harms of Evansdale, Iowa; sisters-in-law, Georgia Harms of Hampton, IA; Nancy Harms of Belmond, IA; Cynthia (Jerry) Post of Solvang CA; Beverly (Dennis) Murphy of Hutchinson, MN and many nieces and nephews.
He is preceded in death by his parents, Taus and Cecelia Harms; 4 brothers, Bennie, Taus Jr., Donnie and Ronnie Harms; 2 sisters, Darlene Ewers and Arlene Wiemann.

To order memorial trees or send flowers to the family in memory of Larry Dean Harms, please visit our flower store.