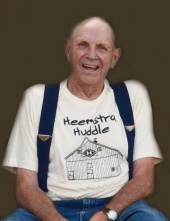 Funeral services for Larry L. Heemstra, age 84, of Primghar who passed away on Monday, September 5, 2022, at the Aspire Care Center in Sutherland. His funeral service will be at 11:00 A.M. on Saturday, September 10, 2022, at Christ Community Church (American Reformed Church) in Primghar with Pastor Cory Grimm ~ officiating.

Visitation with the family present will be from 4 to 6 P.M. on Friday, September 9, 0222, at the Eldridge Family Funeral Home in Primghar.

Processional: “Great Is Thy Faithfulness”

Recessional Hymn: “Run To the Father” by Cody Carnes

After today’s service relatives and friends are invited

to join the family for lunch in the fellowship hall of the church.

In lieu of flowers, memorials may be directed to the Summer of Service scholarship at Northwestern College or directed to Christ Community Church (formerly American Reformed Church) bell tower fund.

Larry Lee Heemstra was born on September 9, 1937, on a farm near Archer, IA to Jake and Jennie (Van Kley) Heemstra. He spent his youth in the Archer, Sanborn, and Primghar area. He started school in a one room schoolhouse near his parent’s farm west of Sanborn. He then moved east of Primghar with his parents and graduated from Primghar High School in 1956.

Upon graduation from high school, Larry served in the National Guard and started farming with his dad. Larry married Joann Wiersema in Middleburg on September 2, 1959, rented a place east of Primghar, and in 1960 moved to his current farm northeast of Primghar. He was active in Farm Bureau, served on the AMPI board, and served for several years on the Primghar Community School board. Larry faithfully served in The American Reformed Church of Primghar, as a Deacon, an Elder, and in many other capacities.

Larry and Joann had four sons together. Joann passed away on November 2, 1984, losing her battle with cancer. After a time, he met Lois Prins DeVos. They were married August 8, 1986, in Sanborn, Iowa, and Lois’ two boys and daughter became part of the Heemstra family. Later, Greg’s college roommate, Kevin Karhoff, became an “adopted” member of the family. He always said to his kids to bring anyone home because “What’s one more?”

Larry loved farming, and the family spent hours working together on the farm. His favorite time of the year was harvest when he could spend hours in the combine. It became extra special when his grandchildren would join him in the field. He also enjoyed fishing and all the grandchildren have fond memories of going with grandpa in his boat. He enjoyed attending his children and grandchildren’s ball games and school events, rarely missing their activities.

He was a strong man of faith in his Lord and Savior Jesus Christ. He was a faithful steward of the land God provided him. Through the many adversities of life, including the death of Joann and his son Todd, his faith remained strong, and he shared what the power of God can do. He witnessed the miraculous healing of his wife Joann in 1979. He faithfully led his family through these times with a strong steadfast faith.

On Monday, September 5, 2022, Larry was ushered into the arms of his Lord and Savior at the age of 84 just a few days short of his 85th birthday. Preceding him in death were his parents, his first wife, Joann; his son, Todd, his two brothers: Gerald and Cal Heemstra, and his “adopted” son, Kevin Karhoff.

To order memorial trees or send flowers to the family in memory of Larry L. Heemstra, please visit our flower store.