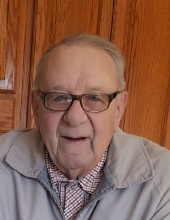 Services for Larry L. Wise, age 82, of Primghar who passed away Tuesday, August 11, 2020 at MercyOne Medical Center in Sioux City. A private family service will be held at 2:00 P.M. on Sunday, August 16, 2020 at St. Anthony's Catholic Church in Primghar with Father Tim Hogan ~ officiating.
A public graveside with social distancing will be held following the service at Calvary Cemetery in Primghar. Flag presentation will be conducted by the Iowa State Patrol Color Guard.
There will be no visitation.
In lieu of flowers memorials may be directed to:

Larry Lee Wise, the son of Glenn O. and Evelyn A. (Statzer) Wise was born on May 18, 1938 in Mason City, Iowa. He received his education from Hampton Schools and graduated from Hampton High School in 1957. Larry served in the United States Army Reserves from 1959-1965. He married Constance “Connie” Albers on August 7, 1961 in Hampton, Iowa. He began his career with the Iowa Highway Patrol in 1962 as Patrolman #289. During his career, the couple lived in Paullina from 1962 -1978 and moved to Primghar in 1978. In 1993, Larry retired as an Iowa State Patrol Trooper after 31 years of service. After his retirement, Larry worked at Lems Auto Recyclers. Larry and Connie enjoyed their coffee times together with many friends. Connie preceded Larry in Death on September 1, 2014. Larry passed away on Tuesday, August 11, 2020 at MercyOne Sioux City Medical Center, reaching the age of 82 years, 2 months, and 23 days.
Larry was a member of St. Anthony’s Catholic Church in Primghar. He enjoyed his morning coffee and driving to see his friends. While out for his drives it was not uncommon for him to take the scenic route.
Left to cherish his memory are his children, Scott (Carla) Wise of Paullina, Brad (Sue) Wise of Papillion, Nebraska, Joan (Kevin) Roos of Primghar, Brian Wise of Oyens, Iowa and; eight grandchildren, Katie (Drew) Triplett, Korey (Lindsey) Wise, Austin (Cailin) Wise, Alex Wise, Kelsey Roos (fiancé, Hunter Fiddelke), Jacob Roos, Jared Roos and Blaine (Tasha) Wise; ten great grandchildren, Addison, Braxton and Hudson Triplett, Reece and Grace Wise, Cohen Wise, Emma, Aubrey, Trinity and Sophia Trometer; sister, Mary Alice (Darrel) Paullus; sister-in-law, Verna Wise; brother-in-law, Alan Albers; also other relatives and friends.
Larry was preceded in death by his parents, wife, Connie an infant grandson and a brother, Richard “Dick” Wise.
To order memorial trees or send flowers to the family in memory of Larry L. Wise, please visit our flower store.