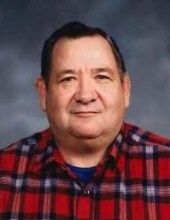 With the family in the Laue Room in the

After the graveside services relatives and friends are invited

to join the family in the Laue Room at the

Larry R. Jurgensen, the son of George and Caroline (Holtgrewe) Jurgensen was born December 22, 1935 in Paullina, Iowa. Larry grew up on a farm outside of Paullina and received his education at the Iowa School for the Deaf in Council Bluffs, Iowa. While in school he played football and basketball. After his graduation he returned to farm with his father in the Paullina area. He had fond memories of fishing in Canada and hunting deer with his Dad. On November 6, 1971, he was united in marriage to Carol Wessling in Sioux City, Iowa. After their marriage the couple settled on the family farm outside of Paullina and farmed until moving into Paullina in 1991. Larry was employed as a janitor at the South OBrien Schools for six years before his retirement. His wife preceded him in death on April 11, 2006 in Paullina. He remained in the family home and passed away there on Thursday, September 28, 2017 reaching the age of 81 years, 9 months and 4 days.

He was preceded in death by his wife, parents, one brother, Lloyd Jurgensen and one sister, Lorraine Jurgensen.

Gods finger touched him and he slipped away

From earths dark shadows to a brighter day;

God saw the road was getting rough.

The hills were hard to climb;

He gently closed his weary eyes.

And whispered, Peace be thine.

To a beautiful garden this friend has gone.

To a land of perfect rest.

Though he is gone he still lives on

In the garden of memory.
To order memorial trees or send flowers to the family in memory of Larry R Jurgensen, please visit our flower store.